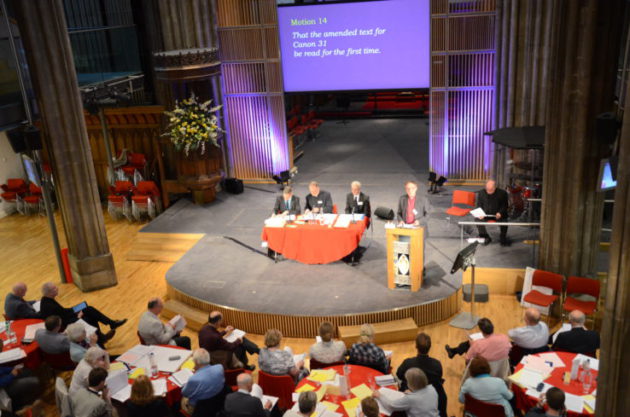 The General Synod of the Scottish Episcopal Church has today passed a first reading of a change to its Canon on marriage (Canon 31). The change is to remove from the Canon the doctrinal statement regarding marriage that marriage is to be understood as a union “of one man and one woman.”

Commenting on the first reading today, the Rt Rev Dr Gregor Duncan, Bishop of Glasgow and Galloway and Acting Convener of the Church’s Faith and Order Board, said:

General Synod last year engaged in extensive debate in relation to possible changes to our Canon on marriage. It asked the Board to bring forward canonical legislation this year to remove from the Canon any doctrinal statement regarding marriage. That would pave the way for clergy of the Church who wish to be able to solemnise weddings between people of the same sex. Synod has this year accepted the proposals brought forward by the Board by giving a first reading to the canonical change. The process will now continue and not be completed until General Synod 2017. If second reading is agreed at that stage, the change to the Canon will take effect.

The Synod’s decision this year is important because it represents the beginning of a formal process of canonical change. The Church has been engaged in recent years in a series of discussions at all levels. The current process will enable the Church come to a formal decision on the matter. Views within the Church are, of course, wide and diverse. The passing of the first reading today will bring great joy to some; for others it will be matter of great difficulty. The wording of the proposed change recognises that there are differing views of marriage within our Church and we have attempted, and will continue to attempt, to sustain our unity in the midst of our diversity.