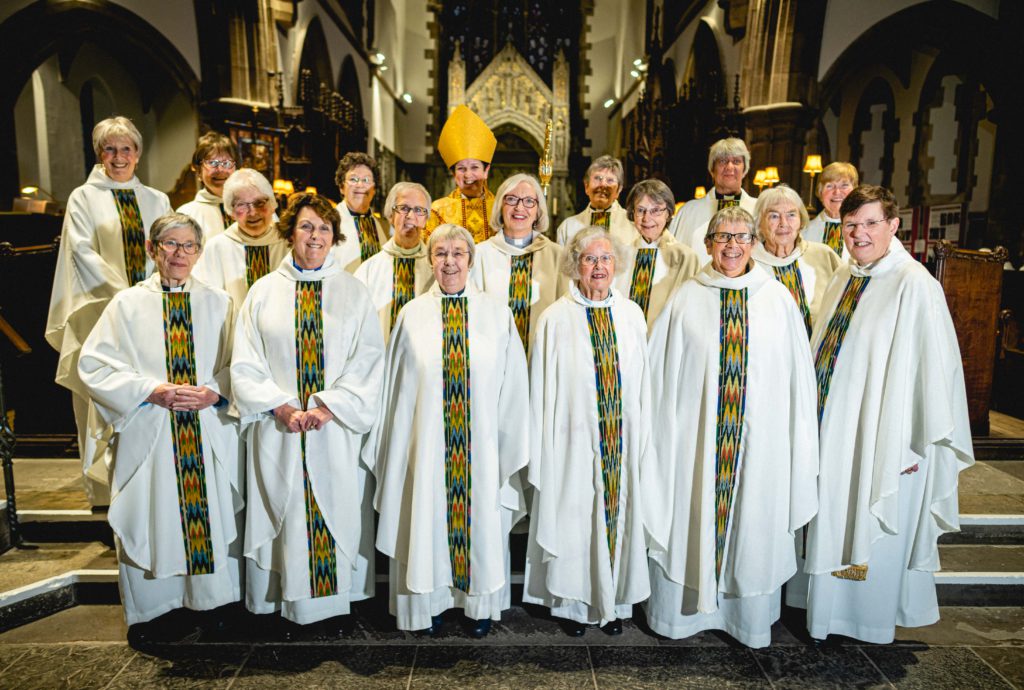 The First Women Priests with the Rt Rev Anne Dyer

On Saturday 14 December, a special service was held at St Ninian’s Cathedral, Perth, celebrating the 25th Anniversary of the first ordinations of women priests in the Scottish Episcopal Church.

Of all the Resurrection accounts, Matthew’s is the most breathless. Listen again to those verbs of motion, the repeated adverbs and brisk imperatives: ‘suddenly’; ‘come and see’; ‘go and tell’; ‘quickly’; ‘hurry’; ‘run’; ‘take word to’.

Look, too, in the imagination of your heart at the cosmic turmoil, the elision of heaven and earth, of eternity reordering history; notice all those signs of the new creation, of earth giving witness to the power of God: the violence of the earthquake, the effulgence of the angel, the filling with fear and the falling to the ground. So much sound and fury.

And in the middle of this maelstrom we see two women; they do not shake like the earth or keel over like the quaking guards, but stand their ground, waiting with expectancy. They have worked and watched, wept and waited this past weary week, and now they come to continue that looking. They come with open eyes and hearts because they believe what Jesus has promised: that after three days He will be raised. They come not with aromatic oils for anointing as in Mark’s account, nor carrying spices as in Luke; they come not to fulfil the role expected of them due to their social location and gender, but present themselves with their need only and the simple offering of their faith.

And in that place of readiness – with a poise born of long preparedness and stillness, a stance of utter obedience and complete self-giving – they are addressed and commissioned by the Risen Jesus, sent by Him to begin the kerygmatic task.

Oh, none of it up to then had been easy – nor was it going to be. There had been such pain in the waiting, such grief at His death and entombment, and so, so much misunderstanding. And even now, even as they release their hands from His wounded feet and set out on the road He has shown them, their joy is mingled with fear. For the naysayers of the establishment and the power- brokers of the empire are closing ranks once again and conspiring to tell fake news, to gainsay the truth of the women’s lived experience. Yet still the two Marys hurry from the tomb to tell others, hurry right into the eye of other storms – of opposition, ridicule and scorn.

We who were bystanders on that historic day in December twenty-five years ago were privileged to witness similar courage, similar obedience; we were humbled and convicted by the fortitude and faith of 42 women who likewise had waited and watched, worked and wept until the canonical stone which had caused their vocational entombment was rolled away.

But on that December day, as the church’s tectonic plates shifted with rumblings and not a little bluster, they stood like those other ‘first women’, serenely, obediently, faithfully. And in the laying on of hands and in the anointing they met Jesus anew and were set free at last to serve as priests in Christ’s Church.

And so today we rejoice with them and with their families on this their Silver Jubilee – and with those on another shore who stood with them all those years ago. We give heartfelt thanks for all that these women have given through their varied ministries; for the Kingdom-work they have effected over the years; for the enrichment they have made to our lives and the lives of others; for the examples they have been to further generations of ordinands. Read the stories of their varied ministries and give thanks. Today, as Bishop Richard writes in that compilation, today is a day of ‘uncomplicated joy’. Thanks be to God.

But it is more than that. Matthew’s resurrection account is a breathless Gospel because the God whom we worship is such a fast God, always before us and leaving as we arrive.

‘Go’, the Risen Christ says to the women at the empty tomb, ‘go’, He says to our first women; ‘go’ he says to us all; ‘go and tell’. ‘Go and leave for Galilee, for that place far from the centre of power and empire, the marginal place, the unlikely place, the place where my ministry began. Go and help form community; work your ministry of reconciliation and bring into the fold of my love those who have fled, those who denied me, those who have never even heard of me. Love them as I have loved you’.

Today is a day of celebration, yes, but it is also, for all of us, a day of re-commissioning. It is a call to learn from these first women priests who, alongside their brothers, have nurtured new forms of worship and community in which the fullness of God is more abundantly experienced and shown to the world. It is a call to learn, like them, to use our experiences of pain and marginalisation and hurt and all those other wounds we each carry – to feel the pain, yes – but then to let those tender spots enlarge our own hearts to grow a bigger vision, to model new structures of co-existence.

For the Resurrection is not about the wiping out of pain or failure; it is about how pain and failure, hurt and wounds may yet be transfigured and made beautiful. If like those first women priests we have experienced what it is to be an outsider, then let us draw on that pain-filled history to work for the inclusion of those who are marginalized today. Let us search our hearts and ponder what it means truly to ‘live the common life in Christ, to have that common attitude of mind, to look to each other’s interests’.

Just as the Group for the Ministry of Women morphed in the mid-80’s into the Movement for Whole Ministry, so let us follow that example and identify those who even now are entombed by prejudice, fear and misunderstanding, those whom our misuse of language degrades, excludes or erases from consciousness. Let us open our arms ever wider to model that graceful co-existence, that ‘belonging-together’ of which Paul speaks, that richer imaging of God – and so offer hope to the world. Let us expand our pastoral imaginations in the way our Roman Catholic sisters did so beautifully back in 1994, first worshipping in one of their Cathedrals and then processing to one of ours to congratulate the newly priested women. What immense generosity of heart, what common sharing in the Spirit, what tenderness and compassion!

Can we do likewise for them – and for all those others who are still trapped by the Church’s or our own ‘othering’ of them? Can we ask every time we gather ‘who is not at this Table?’ ‘Whose voices are we failing to hear?’ ‘Whose identity does our language diminish?’

As the 42 newly ordained priests stepped out so bravely onto the path towards their own Galilees across all the airts of this Province, let us today follow their example. Let us take word into our local communities that death has no more dominion, show our neighbours by our caring that Love casts out fear, and yes, oh yes, ‘tell this sad old world that it is forgiven’. May Christ Easter in us, so we and all God’s children shall be free and the whole earth live to praise God’s name.

‘Go’, Jesus said to the two Marys in the garden.

‘Go’, He said to our own wonderful ‘first women’.

‘Go’, He says to each of us today; ‘go and do likewise. Go as priests to the world, bearers of my reconciliation, and do not be afraid. For I am with you always, even to the end of the age.’

In the name of God, Source of all being, Eternal Word and Holy Spirit.