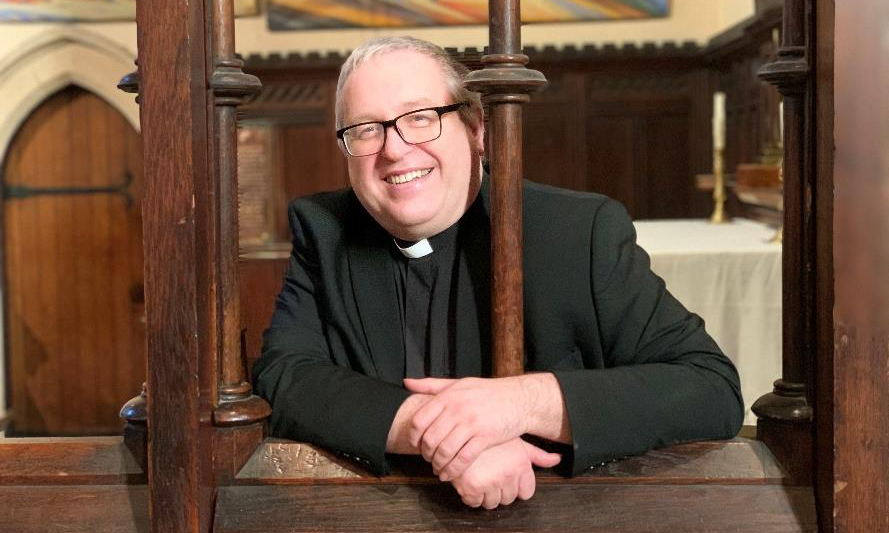 The Alastair Haggart Bursary Award, set up by his family in memory of Bishop Haggart, Primus of
the Scottish Episcopal Church from 1977 to 1985, offers an annual grant to help fund a sabbatical or similar leave of absence for someone in authorized ministry. Such leave should occur at a stage in the person’s life when the experience will significantly enhance his or her ministerial practice and development. The outcomes of the project should also be of benefit to the wider Church. Grants in recent years have funded studies of ‘pilgrimage’ and ‘interim ministry’ and also a sabbatical in the Tantur Institute of Ecumenical Research. Another beneficiary produced a meditative Lent Study Guide based on a daily artwork, having spent time in art galleries in Washington and New York.

We are delighted to announce that this year’s winner is the Very Revd Kelvin Holdsworth, Provost of St Mary’s Cathedral, Glasgow.

Provost Holdsworth plans to travel to the States and stay in Virginia Theological Seminary, the largest Episcopal seminary in the United States, there to engage in theological thinking and writing on the theme ‘Full Inclusion – a Liberation Theology of the West’.

Such research will be amplified by travel to Mexico City and Havana, enabling him to make contact with Christians living in different contexts to his own, build up friendship links within the wider church and influence his own future work in the Scottish Episcopal Church.

Provost Holdsworth has been involved in many movements for progressive change both in the church and in the world, particularly the move towards the ordination of women and the campaign for equal marriage in Scotland. He has also been a political campaigner in the secular field, standing in a General Election in 2005 by way of campaigning against the Iraq War. He now wishes to begin to think through what has been learned in the course of all this and share his experience and thinking with others, both within and beyond the boundaries of the church, by means of writing.

On hearing of the award Kelvin said: “I’m thrilled to be awarded the Alistair Haggart Bursary. It gives me an incredible opportunity to do some theological thinking about my own experiences in ministry. It will also enable me to rekindle old friendships and make new ones in different contexts within the Anglican Communion.”

Bishop Mark, Acting Bishop of the Diocese of Glasgow and Galloway, writes: “I am delighted that the committee agreed that this year’s award should go to Very Rev Kelvin Holdsworth. Kelvin has worked tirelessly in pursuit of a more open and diverse church. He has developed a wonderful liturgical and spiritual life at the Cathedral and can now find the time and space to reflect on all of this while presenting to the Church a carefully considered theological reflection on this powerful ministry”.

This story originally appeared in the February edition of the Scottish Episcopal Insitute (SEI) Newsletter.  You can download the SEI newsletter at our website here.