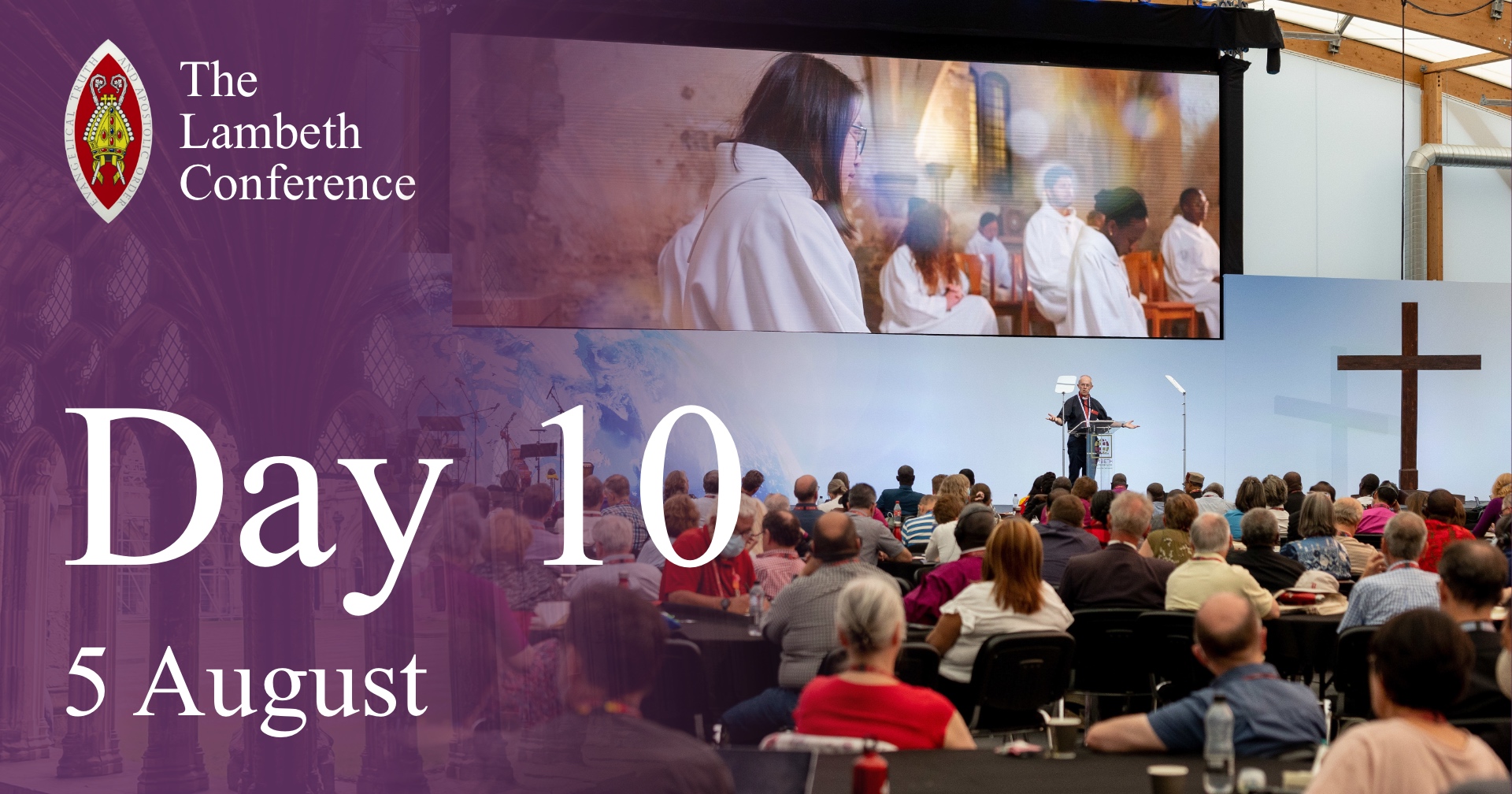 On Friday, the Bishops attended a plenary session and affirmed the Lambeth Call on Discipleship. In the evening the Archbishop of Canterbury, Justin Welby, delivered his second keynote speech on the theme of Living in the World as a Christian.

The Rt Rev Anne Dyer, Bishop of Aberdeen & Orkney sat down for a conversation with Fr Martin Browne OSB, part of the Roman Catholic delegation of ecumenical guests at the Lambeth Conference, to talk about Christian Unity and ecumenism following the previous day’s Lambeth Call on the topic.

The Rt Rev Dr John Armes, Bishop of Edinburgh is joined by the Rt Rev Ernest Flemming, Bishop of the Northeastern Caribbean & Aruba for a discussion on the plenary and Lambeth Call on Discipleship.

Dr Elspeth Atkinson, the Spouse of the Bishop of Glasgow & Galloway, Bishop Kevin Pearson, recorded a video reflecting on her highlights of the conference so far, the relationships made, the experiences shared, and the things she will take away from the conference.

The Most Rev Mark Strange, Bishop of Moray, Ross & Caithness and Primus joined bishops from around the world in prayer, and standing in solidarity with those in East Africa who are facing the threat of famine.
He said: “I find it staggering that we have 24-hour news going on in this country and yet no one knows anything about the food crisis that’s taking place in East Africa. In 2017, we began to get signals that things weren’t right and there are all sorts of reasons why things may be difficult to sort out, but we can’t just abandon a whole portion of the world because it doesn’t fit in with our own political agendas or with our news of who is going to be the next Prime Minister. This is the really important stuff.”

Christian Aid, who have organised a petition asking the UK Government to take immediate action, reported that: “Bishops, including those from South Sudan and Kenya, took time out of the conference to pray together. Alongside the Archbishop of Canterbury, Bishop Joseph Maumo Wandera, the bishop of the Anglican diocese of Mumias, Kenya, led the prayer.”

You can read more here, and sign the petition here.

Bishop Mark also reflected on the events of the beginning of the week and the Calls on Human Dignity and the Environment in his blog: “Archbishop Justin spoke clearly and powerfully. He told us what he believed: that there is a traditional understanding of marriage as understood theologically and biblically by much of the Communion but that others through theological study and careful exegesis believe that the sacrament of marriage should be available to all who are called into that kind of relationship.

“As he confirmed that there would be no sanctions and no exclusions I realised I was weeping: we were fully home as part of the Communion. Once everyone had spoken in their groups we were asked to stand in affirmation of the Call. I watched as those who had most disagreed with us stood shoulder to shoulder with alongside us and we all bore witness to the unity of the Communion in its diversity. I will never forget this moment.”

He added that on Wednesday the conference delegates: “listened to and engaged with the Call on the Environment and afterwards, as we stood in the shade, hiding from an intense sun, we watched as a new tree was planted and we all then went and added our cups of earth to the tree. In contrast, the lawn at Lambeth was burnt brown by weeks of intense sun and intermittent rainfall, leaves were falling from the trees and it was obvious that climate change is all around us.”

Bishop John Armes (Edinburgh) reflected on the Call on Discipleship, writing that: “Our baptism promises commit us to following Christ and we are called to be open to the movement of the Holy Spirit in us and through us. This call must certainly lead us to serve others and may sometimes plunge into real suffering, as many of our sisters and brothers across the globe perhaps know better than we do. All this is a given. But I was concerned that lurking behind the various inputs was the apparently unquestioned assumption that there are ‘nominal Christians’ and there are ‘Christian Disciples’ – bad Christians and good Christians.”

Bishop Anne Dyer (Aberdeen & Orkney) wrote about the Call on Discipleship, sharing that during the plenary session: “stories began with descriptions of dioceses where many members could be described as at essentially a ‘passive stage of spiritual development’. What was needed was for ‘adult persons to hear the good news of the gospel, renew their own baptismal covenant, and consciously choose Christ as their own personal Lord and Saviour, and commit themselves actively in the life of their church’ (Sherry Weddell). The bishops discussed together ways that a deepening life with Christ could be encouraged and supported. How might this happen in every diocese, among peoples with very different cultures and preferences, different ways of learning and styles of praying?”

In the evening, the Archbishop of Canterbury spoke on Living in the World as a Christian: “The Communion must have those who are wise in the world. How can science serve the Kingdom unless we have those who can argue the claims of God based on the gifts God has given us in science and technology? How can we challenge the selfishness of the rich if we are unable to argue with economics in the power of the Spirit? Look at the failure to share the Covid-19 vaccine. Now multiply several thousand times to an age shortly to come, when climate change wreaks havoc around the world, where sea levels rise. Will the rich withdraw behind high, armour protected walls? Or will we seek together to do right? It is the churches, especially Anglican and Roman, that have the global networks to do right.

“The Communion must be united. Note, I do not say unanimous. It must be united in a way that reveals Jesus Christ. The miracle that God has brought about in the church is not that like-minded people like each other, but that the most unlike people love each other. We are seeing that this week, but to maintain it is difficult. People will say that by being friends of those with whom they disagree we are changing sides.

“They said the same to Jesus.”

Today, on Friday, the Bishops are attending a plenary session on the Decade ahead, which is live streamed here.  The Bishops will consider the Statements of Support (a series of summaries of the week’s discussions and any wider statements the conference wishes to make) and the Lambeth Call on Science and Faith, and the Environment and Sustainable Development.