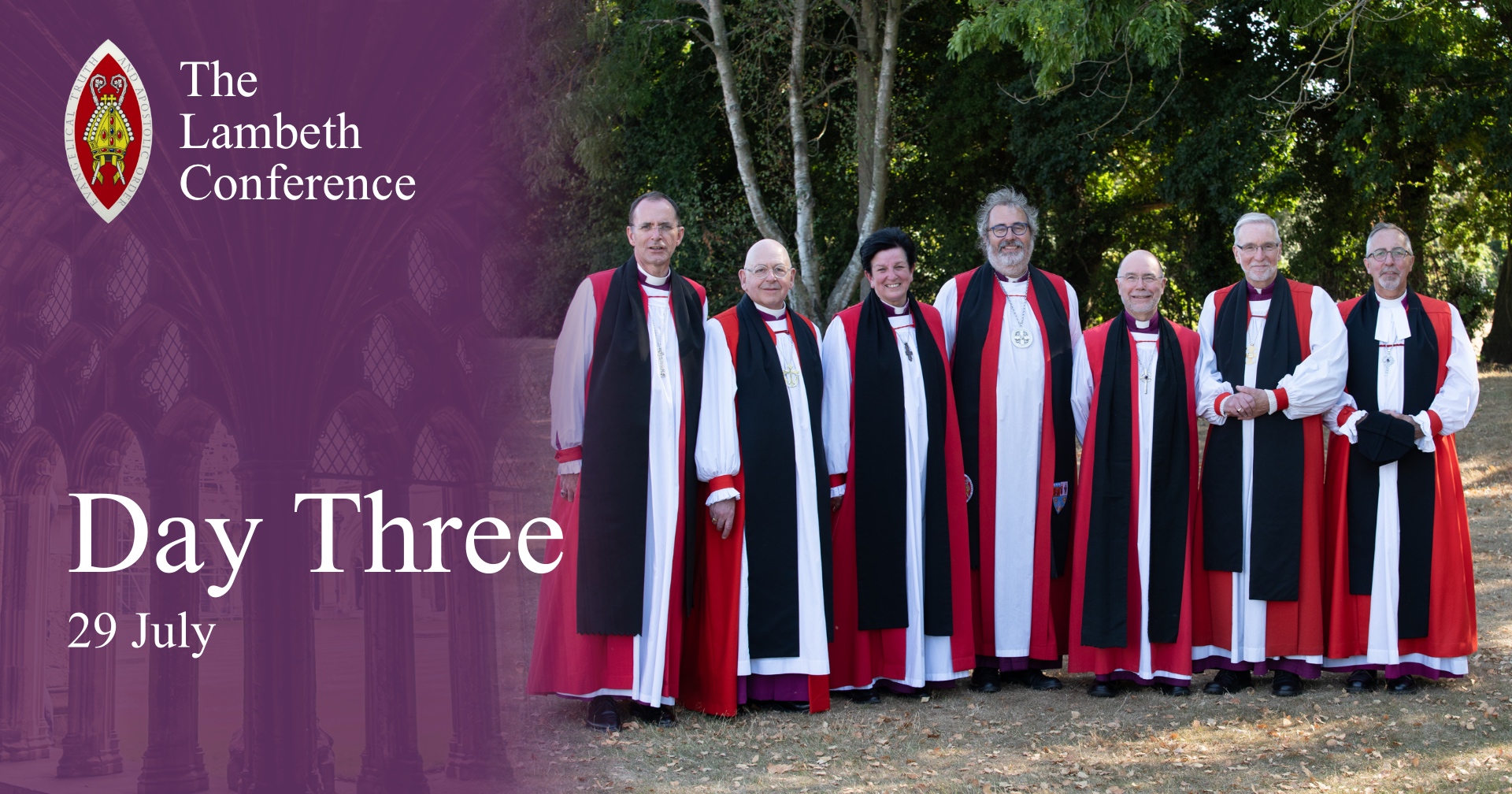 On Day 3 of the Conference, the Bishops and Spouses spent a second day on retreat, the formal photographs were taken, and the Archbishop of Canterbury delivered his first of three keynote speeches.

The full text of Archbishop Justin’s first address to the Lambeth Conference can be found online here – and you can watch the video here.

Responding to news that an attempt was underway from a group of Bishops at the conference to canvass support for a new version of the Lambeth Call on Human Dignity, the College of Bishops of the SEC issued the following statement: “We remain committed, as before, to engagement and dialogue on the Human Dignity Call and all other Calls at the Lambeth Conference, listening respectfully to one another and building relationships across the Anglican Communion.”

Bishop Kevin Pearson (Glasgow & Galloway) reported that the work of the programme began yesterday afternoon, noting that he will “report more on our deliberations as the conference progresses”.

Bishop Ian Paton (St Andrews, Dunkeld & Dunblane) wrote about the Bishop’s photo, and reported that he had met with his Diocesan companion link Bishops Marinez (Amazonia) and Paritosh (Calcutta).

Bishop John Armes (Edinburgh) reflected on: “another day of quiet reflection and relationship building.” saying that “there are some sections of our community anxious about the ‘Call’ on Human Dignity but, like my Scottish colleagues, I remain committed to being ‘in conference’ with the bishops of the Anglican Communion over the next week. This means respectful listening to one another, and this has been prepared for by these two days of retreat.”

Bishop Anne Dyer (Aberdeen & Orkney) reflected on the poignance of the 97 attending women Bishops having their photo taken.  She writes: “I attended Lambeth for an event in 1998, when there were eleven bishops in the Anglican Communion, most of these from the Episcopal Church USA. In 2008 the number had gone up to a number in the 20s. This year on the day there were 97 of us. The women’s photo was the one we wanted.” She adds that: “As we gathered on the stand we were excited. We sang ‘Girls just want to have fun’! (Cindy Lauper). However, by the end many of us were in tears, so moved at how far our church has come. We have always believed the earliest churches had women apostles – now the church has many!”

The day also marked an opportunity to take a photo of the Scottish Episcopal Bishops robed up for the Lambeth photo.

The College of Bishops of the Scottish Episcopal Church, taken in Canterbury at the 2022 Lambeth Conference.

Today the first plenary sessions begun with the Mission and Evangelism plenary exploring “how the church lives to proclaim the Good News of the one who has called us out of darkness into light.”