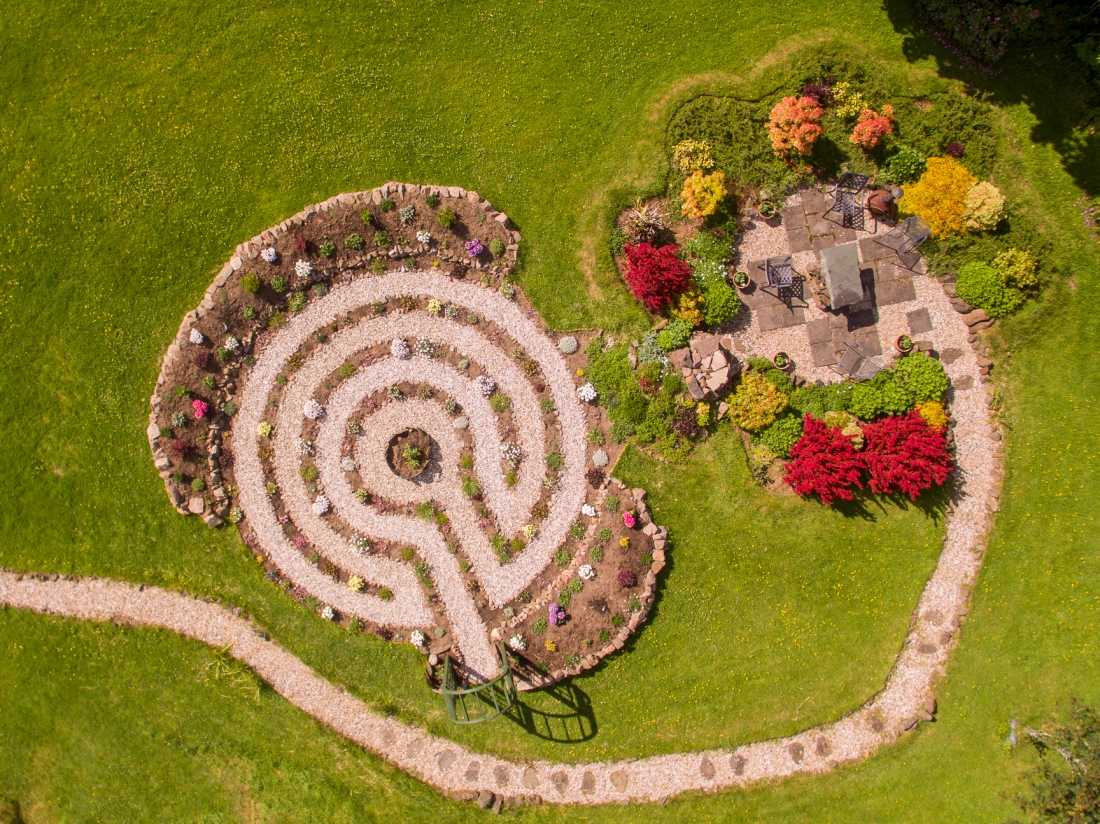 The new edition of monthly magazine Inspires Online has just been published, and prominent in its content is the story of how one Scottish Episcopal Church member channeled her energies during lockdown into the creation of a labyrinth in her garden.

Over the past ten months, Mairi Ross of All Saints Episcopal Church in Bearsden has painstakingly dug out and re-arranged dozens of heavy rocks to create a very impressive and artistic structure around which plants are now blooming.

“Like so many, I was very frustrated at being unable to worship in church for so long,” says Mairi. “I semi-jokingly said that if it all went on much longer I would build my own church.

“A pause for reflection made me think that was a bit ambitious, but the idea of a labyrinth, as having at least a degree of Christian significance, caught hold.

“There is no way I could have completed this project without the help of my husband Niall, particularly when it came to excavating the enormous rocks lying under the surface of our garden!

“The trick with the really big rocks was: borrowing my husband,a mattock (wonderful tool), two five foot long wrecking bars, and using a strong porter’s trolley as an extra leveraging tool. There is a pleasing symmetry about the very first and the very last boulders being the hardest of the lot!” 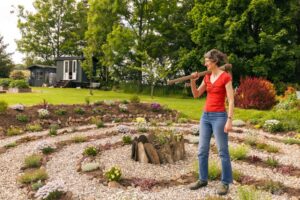 Mairi’s labour of love was also highlighted recently in a blog post by her neighbour, the designer Kate Davies, describing Mairi’s structure as “an act of personal devotion in the absence of her collective”. Kate’s husband, Tom Barr, took a series of excellent photographs of the creation, which we have been given permission to reproduce here.

Writes Kate: “Mairi began the project on October 1st, and has worked on the labyrinth virtually every day between then and now, in weather fair and foul. On even the most inclement of winter days, blasted by rain and wind, snow and sleet, Mairi laboured on with her mattock, digging out the labyrinth.

“The stones which surround the labyrinth, and mark its inner paths, were all dug from the ground by Mairi (which as owner of the adjacent garden, I can attest to being largely composed of heavy clay, and full of gigantic stones). This labyrinth was formed from really hard, physical work!

“Once the measuring, digging, excavating and wall and path building were complete, Mairi planted the labyrinth’s beds and laid gravel between them. The end result is truly stunning, and will doubtless become more so, as the plants spread to fill the beds in future years.”

Kate added: “I don’t share the same faith as Mairi, but I do appreciate how the construction of her labyrinth represents a significant act of faith and devotion, and how it, as an object and a space, provides opportunities for discipline, practice, and reflection. I also greatly appreciate being able to see it every day – among the many other wonderful things I see and experience daily as I do, living here, in this landscape.

“I think Mairi’s labyrinth just sings of resourcefulness, determination, and creativity – all of which are characteristics of its maker.”

The labyrinth was completed on 13 June this year, when the last layer of gravel was placed on one of the paths. Mairi wrote in the All Saints magazine: “I have immensely enjoyed creating this, even, up to a point, when it required digging a bottomless pit under water, or hacking through earth fairly literally as hard as iron. It all seems a bit unreal now, looking at the finished product.

“I do occasionally ask myself how long it would have taken if I had just paid someone with rather more manpower and some heavy duty digging equipment, but then it would have cost (I imagine) a small fortune, and I wouldn’t have had the inestimable secondary benefit of it as my ‘sanity project’!”

Inspires Online can be accessed here.