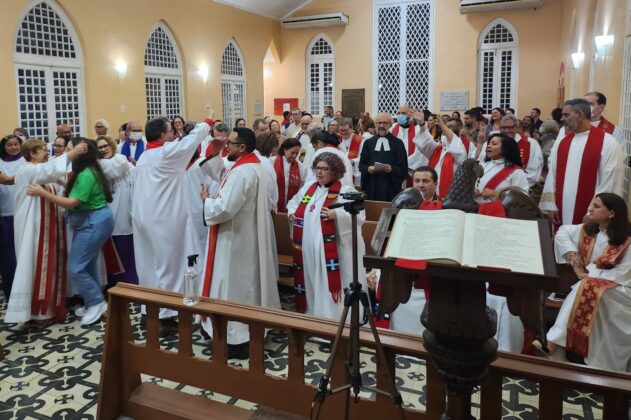 The Primus of the Scottish Episcopal Church recently visited Brazil on the invitation of the Archbishop of the Episcopal Anglican Church of Brazil, Bishop Naudal Gomes, to preach at the enthronement of his successor – Bishop Marinez of Amazonia, the first female primate of a Latin American province.

The election took place during the four-yearly General Synod of the Brazilian Church, in the city of Belem at the mouth of the River Amazon. The Primus was also invited to the Synod as a guest, having previously attended the Synod four years ago to address members on the subject of marriage canons.

Here, Bishop Mark reflects on a memorable celebration, but also on his discussions over the challenges of poverty, Covid and the rainforest.

“After a lengthy journey I arrived in the Belem just as the sun was setting,” says Bishop Mark. “The last part was on a relatively low flying plane, allowing me to see the expanse of forest and the gaps in it.

“The Synod began with a Eucharist in the St Mary’s Cathedral which as always was followed by dancing, eating and drinking. They really know how to enjoy themselves.

“We heard reports from the various projects that the church runs, largely dealing with the issues of poverty in the communities across Brazil. They also had a session on plans to move the church back into missionary mode following the catastrophic effects of the Covid pandemic. I was asked to give a reflection on their plans and to share what experiences we have had that might help them in their planning.

“The election of the new Primate took place on the Wednesday evening and Bishop Marinez of Amazonia, whose diocese is linked with the Diocese of St Andrews, Dunkeld and Dunblane, was elected to scenes of joy and acclaim.

(Picture above shows happy recipients of Inverness Cathedral tartan scarves, with Archbishop Marinez on the right)

“The election was immediately followed by the installation of the Archbishop. I was the preacher and one of the concelebrants at the Eucharist, a wonderful act of worship which lasted well into the evening and was marked by more dancing and feasting – where a kilt-wearing Primus was in demand  for photographs.

“After what was more of a nap than a sleep I was back on the plane and heading home. I had discussed politics, the environmental effect on the planet and the need to protect the Brazilian rainforest, the life of the Anglican communion and the relationships that hold it together. I had spent a week amongst real friends, including both those who I had met before and the new ones I made. We are blessed in the communion to have such a vibrant and generous church thanks to our friends in the Episcopal Anglican Church of Brazil.”