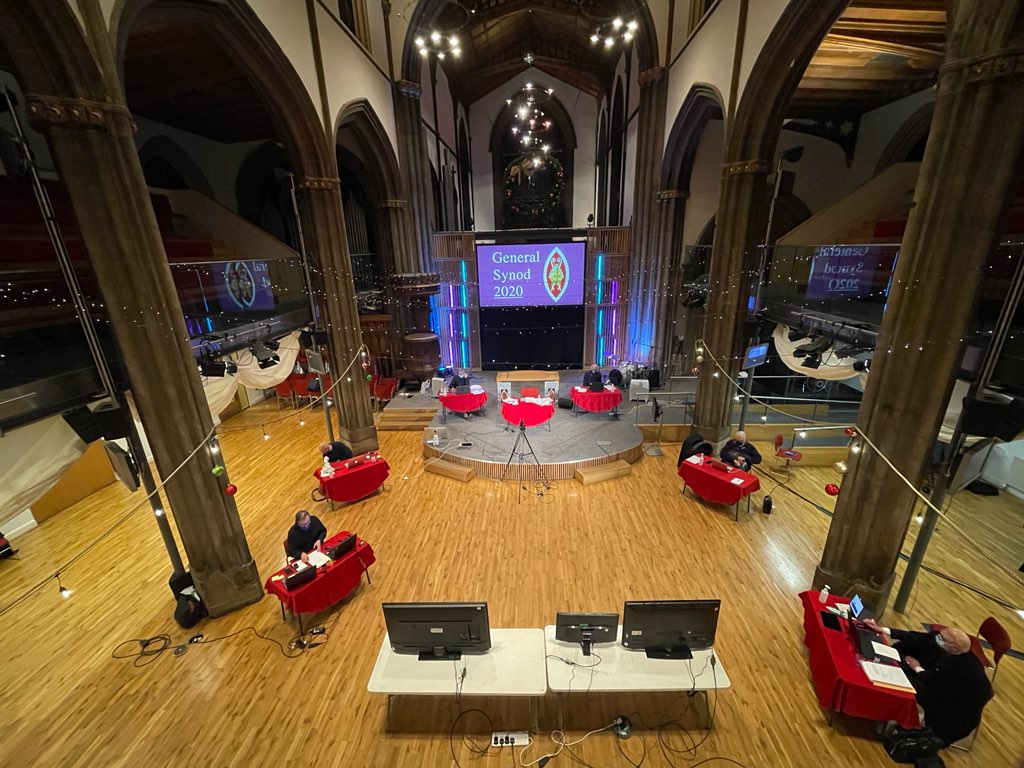 ‘We cannot challenge others if we do not challenge ourselves’ was the message from the Primus of the Scottish Episcopal Church as he gave his charge during the morning session of General Synod 2020.

The Most Rev Mark Strange, Bishop of Moray, Ross & Caithness and Primus of the SEC, raised the difficult issues of bullying, bias and racism awareness in his opening address, and pointed to the issues that the Church should speak out about, such as international aid, gender violence, modern slavery and climate change.

On a historic occasion at St Paul’s & St George’s Episcopal Church in Edinburgh, with just a handful of core participants present in the church building, the Primus (pictured below) told the first-ever online General Synod: “We have questions of what sort of investments we place our money into but also questions about how we heat our churches, how often and how far we travel, about the resources we use to run this institution.

“We need to get our own house in order if we are to keep putting pressure on the governments and industries of the world. You can’t challenge others if we don’t challenge ourselves.” 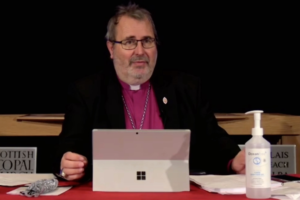 His theme echoed throughout the day, most notably when Synod members backed a motion which paves the way to a commitment to achieving net zero carbon emissions by 2030.

The motion was carried by 98 votes for, zero against, and five abstentions. It calls on the Church in Society Committee, working in conjunction with other appropriate bodies, to bring forward a programme of actions to General Synod 2021 to resource the SEC in working towards achieving net zero carbon emissions by 2030.

Speaking after the climate change debate, the Primus said: “We are now set for a year of hard work as the committee and others across the church and in our partnership organisations seek to bring to Synod a programme of actions that we know will challenge many of us. Clearly there will be financial implications, implications on how we look after our buildings and how we use the resources of our planet.

“I am very aware of how important this work is going to be as we strive to reach a target that will enable us to move from users of creation towards being custodian of all that the Creator has given us.”

Earlier, the Rev Elaine Garman spoke for the motion, telling Synod members: “During the past nine months we have changed our lives to protect ourselves and others during the pandemic restrictions. Imagine if we had worked on reducing our carbon footprint the same way. Whilst some of the Covid changes have helped reduce our carbon footprint – it shows we can make changes but there is so much more to do. We are in a climate emergency and we need to mobilise like never before.

“For too long the Anglican Communion’s fifth mark of mission: “to safeguard the integrity of creation and to renew and sustain life on earth” has been seen by many as something we’ll get around to at some point or that someone else will deal with. But it doesn’t work that way. We all must act, and act now. As a church, we must lead.” 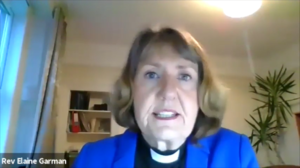 Rev Garman, pictured above, added: “Change is already happening, but the church has a role to make it happen faster, to put its own house in order, to be part of Scotland’s preparation for the COP26 climate summit next year. We have a responsibility to demonstrate courage and stir up complacency. Humankind has great ingenuity and when it comes to it, capacity to solve problems when it has the ambition to do so. The church has an important place to drive that ambition, making a positive contribution in its own right, and to build connection between people that draws everyone into a common aim. This can be our legacy.”

On a similar theme, Synod discussed an interim report from the Ethical Investment Advisory Group, which was set up after last year’s Synod and tasked with, among other things, achieving fossil fuel divestment in the Unit Trust Pool (UTP). Standing Committee was pleased to note that the UTP no longer has direct investments in companies engaged in fossil fuel extraction, and commended the EIAG report to Synod while acknowledging that the work of the Group has a long way to go in what is a complex landscape to navigate.

The Rev Diana Hall, a member of the Group, told Synod: “Climate change is only one of several concerns that an ethical investment strategy might address. However the magnitude and urgency of the need to limit global warming means that addressing fossil fuel investment has been the immediate priority for the EIAG’s work.

“As is clear from the interim report, the work of the Group is complex and nuanced. Ethical investment principles must balance requirements of moral and ethical imperatives, legal responsibilities and practical needs. As a church we must be faithful to our spiritual and moral values under God; wise stewards of the money entrusted to us; and attentive to the practical implications of our actions for our mission. This last point has particular resonance for us because as a denomination we currently rely significantly on investment income to fund our work.”

Rev Hall highlighted the importance to note the difference between fossil fuel extraction and fossil fuel burning, with the latter the main cause of human-induced climate change.

She added: “If we divest from fossil fuel extraction companies while continuing to invest in those who burn significant volumes of fossil fuels – think for example of airlines, logistics companies, and countless others – our actions are scientifically and ethically inconsistent. Should we divest from these companies too? How should the Church respond?

“We propose focusing for now on fossil fuel extraction, recommending an updated definition of divestment as follows: “Divestment from fossil fuels means the avoidance of any investment which results in the UTP holding, directly or as part of a pooled fund, any interest in any business which generates more than 10% of its turnover directly from extracting fossil fuels”.” 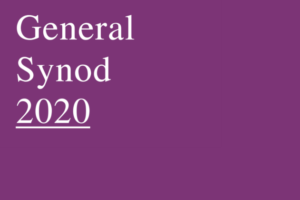 Alan McLean QC, chair of the Group, outlined the many difficult questions related to ethical investment, acknowledging that there are no simple answers and pointing out that although experience elsewhere, including in other churches, provides helpful models, “none is likely to fit our specific needs without modification”.

Mr McLean said: “Our plan is to produce advice that is not only ethical but also practical, holding in tension the many differing views within the Church on these issues, and having adequate regard to the underlying realities of the SEC’s needs and resources.

“The most important thing is to carry on moving forward in dialogue, constructively, to deliver lasting, truly ethical, yet truly practical, advice which our church can actually put into effect, that will hold good whatever the global economy throws at the UTP in the months and years ahead.”

The only other motion during the afternoon session saw a new Safeguarding Policy adopted by a margin of 90 votes for, zero against and five abstentions. The motion drew a significant number of speakers, including Rev David Paton-Williams (Diocese of Edinburgh) and Rev Neil Brice (Diocese of Aberdeen & Orkney) who both raised the issue of protection for clergy from malicious complaints, and Mrs Victoria Elliott (Diocese of Edinburgh) who asked how the Church would implement a culture of safety in every area and stressed the importance of safeguarding in the digital field when social media thrusts people into the role of public face of the church.

Rev Dr Sophia Marriage (Diocese of Edinburgh) also urged recognition of the importance of prompt feedback on safeguarding matters to vestries and dioceses.

The safeguarding debate fell between discussions on the work of the Administration Board and the progress of the Canon 4 Review Group.

The Rt Rev Dr John Armes outlined two options put forward by the Canon 4 Review Group, designed to enhance or re-imagine the process for the Election of Bishops. Synod members were encouraged to give feedback, as the process works towards bringing a Canon for first reading in 2022.

“I can’t emphasise too strongly the import of the choice before us,” said Bishop John, pictured above. “Whilst the Review Group cannot ignore the cogent arguments put to us in favour of an Electoral Council rather than an Electoral Synod, neither are we willing quickly to disregard a tradition that is so much a part of our identity. So, we put both options before the church and seek your prayerful and thoughtful response before travelling further down the path of canonical revision.”

Mr Jim Gibson and Ms Jan Whiteside, respective Conveners of the Administration Board and Personnel Committee, reported on work in progress within those bodies on issues of steps being taken to introduce policy to address bullying and harassment within the Church and also the level of clergy stipend and time off.

“A clear policy statement that bullying in the church is unacceptable will be a starting points,” said Ms Whiteside.

The final main item of business in the afternoon session was a video presentation from the Provincial Youth Committee which showed what had been achieved during 2020 despite the restrictions of the pandemic, before Rev Canon Dean Fostekew reported back on the deliberations of the breakout groups held before lunch, and the Primus paid tribute to Mr Robert Gordon the out-going Convener of the Standing Committee, praising Mr Gordon for his determination over the past five years despite sometimes feeling he was “pushing at a door which is difficult to open”.

“At all times he has walked alongside many of us through complications and difficulties, with great humour and determination, and clear evidence that he has spent much of his life making sure politicians behave,” said the Primus, referring to Mr Gordon’s career in the civil service. “He’s been quite good at that with the College of Bishops as well. We want to thank you for the incredible work you have done, to make sure we are relevant, that we have processes that are looking forward, and that above all, at all times we are faithful to our commission from Christ.” 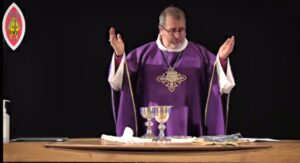 The meeting closed, as it had opened, with worship. Canon Fostekew led Evening Prayer to bring General Synod to a conclusion, with proceedings having begun earlier in the day by the Primus as he led the Opening Eucharist (pictured above).

A report of the morning session can be found here.