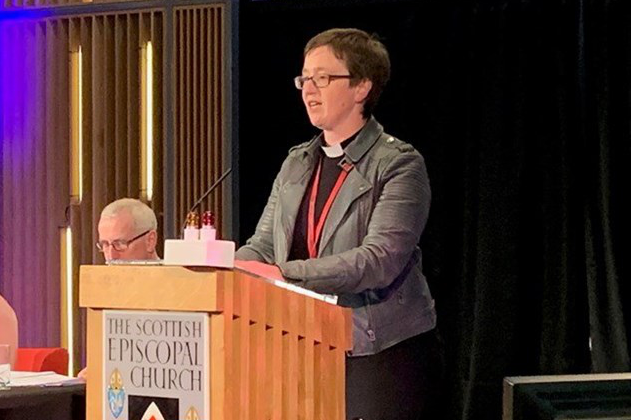 In today’s Thought for The Day on BBC Radio Scotland, the Rev Diana Hall considered our attitudes towards death as the country mourns the passing of Her Majesty the Queen.

Rev Hall, Rector of St Anne’s in Dunbar, highlighted the Queen’s following of Jesus and her enduring faith, which sustained her as she reached the end of her long life.

“A week after the death of Her Majesty the Queen, we continue to be met on all sides by the weighty traditions accompanying the passing of a monarch,” said Ms Hall.

“The formal rituals being undertaken are of course marked by much more ceremony than the practices we are most familiar with. Her coffin has travelled the length of the country slowly and publicly, with ministers and mourners keeping vigil. Many thousands are paying their last respects in person.

“In many faiths, dying well and mourning well are considered an art. Traditions have developed over centuries, intended to help us grieve with dignity, respect and love. They also encourage us to do what many are frightened to do: stop and pay attention to death, recognising our own finitude.

“Dying is a natural and normal part of life. Looking back over recent times, Her Majesty’s demeanour indicated that her life was drawing towards its close. She was frailer, moved less easily and tired more quickly. Yet there was no indication of anxiety or dismay. Just days before her passing she was still fulfilling the duties of the Crown, and she seemed cheerful.

“It’s often said that the best preparation for a good death is a good life. The Queen spoke publicly of her life as being modelled on that of Jesus, and said that her faith sustained her. The traditional prayers of the church help form such faith. She would know the words of Compline and Morning Prayer, traditionally said before bed and on waking each day. In Compline the person commits themselves into God’s care before sleep – just as the dead are commended to God at a funeral. And Morning Prayer begins each day with thanksgiving, recognising the gift of life.

“These practices instill a daily recognition of natural cycles of life and death, all held before God. They also bind up the Christian hope that death is not only an ending, but also the beginning of eternal life.

“This week we are invited to look death in the eye. As we do so, may we find our fear diminished, so that we are more able to live each day with freedom and hope for tomorrow.”

The broadcast, which was part of the Good Morning Scotland programme, can be heard online here at the 1:22.03 mark.