The annual meeting of the General Synod of the Scottish Episcopal Church (SEC) took place on 6-8 June in St Paul’s & St George’s Church, York Place. Edinburgh. A range issues, concerns and opportunities facing the Church were discussed and debated. The minutes of the meeting will be made available in due course on the provincial website and so what follows is only a brief summary of some of the main issues which were addressed.

The Primus’ charge to Synod can be viewed here. 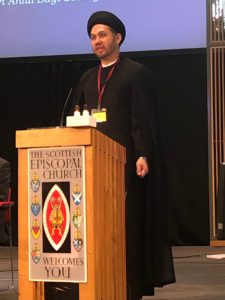 In a discussion on interfaith relations, congregations were encouraged to engage with other faiths in their neighbourhood and the Synod was pleased to welcome the Director General and Chief Imam of the Scottish Ahlul Bayt Society, Sheikh Sayed Ali Abbas Razawi. His address to Synod can be viewed here.

Another substantial debate focussed on the subject of ethical investment and Synod opted to adopt a motion, received just as Synod started, from a number of members calling for an Ethical Investment Advisory Group to be formed to develop a strategy with a view to future disinvestment from sources of revenue regarded as unethical.

Lengthy debate took place in connection with the report from the Personnel Committee on a clergy well-being survey which had been conducted earlier in the year. Particular issues arising were bullying and harassment experienced by clergy in the Church and also issues of work-life balance.

Synod accepted a second (and final) reading of canonical changes to include church curtilages within the scope of Canon 30 and to dissolve the Information and Communication Board. Synod also approved a proposal from the Standing Committee that the level of provincial quota be frozen for 2020 (the second consecutive year when provincial quota has been frozen). Future strategic aspirations articulated by Standing Committee included: formation (equipping those preparing for ministry), mission (support for dioceses, particularly financial), governance (ensuring fitness for purpose of organisational structures), support (provided by the province to the wider SEC), relationships (both within the SEC but also with other parts of the Anglican Communion and with other faiths); communications (further communication using professional resources and technology).

Synod received a summary report on an audit of safeguarding practice carried out within the Church which identified areas in which work will be focused for the future, including training and a clear understanding of the respective responsibilities applicable at different levels within the Church.

An ecumenical policy statement, similar to that already adopted by the Church of Scotland, was approved and a joint presentation was given with the Church of Scotland on the current initiative between both Churches known as Our Common Calling. Synod also endorsed a statement signed by the Primus and leaders of the Methodist and United Reformed Churches in Scotland.

The Mission Board reported on the first three years of operation of the Mission and Ministry Support Grant Scheme and presented two short video clips from individuals about their experience of coming to faith and of discipleship. This led into group discussion on questions of discipleship generally. The Church in Society session focussed on the importance of developments in genome editing and the moral and ethical challenges for both humans and animals which such developments pose.

The Institute Council profiled the role of lay readers within the Church and heard from two individuals in different settings about how their lay ministries were exercised in practice. A report was also provided on how the new Mixed Mode Training offered by the Scottish Episcopal Institute was going, with positive experience being shared by the rector of one of the churches serving as a mixed mode placement.

The College of Bishops reported on new processes for recruitment and selection for ministry and facilitated a group discussion about the role which churches could play in reconciliation at times of significant social change.

Reports were given by the Church’s two representatives who had attended the meeting of the Anglican Consultative Council in Hong Kong a few weeks previously and also from the SEC’s delegate attending the UN Commission on the Status of Women meeting in New York in March, linking with the work of the Global Partnerships Committee. A video of that latter presentation is available here. Many members of Synod showed their support for the Thursdays in Black campaign by dressing in black on the first day of Synod.

Reports were also given on progress to date in connection with a review of Canon 4 (which sets out the process for episcopal elections), a review of Canons 53, 54, 64 and 65 (relating to various matters including clergy discipline and safeguarding), on the prospective publication of a book on Truth in a post-Truth Age on which members of the Doctrine Committee have collaborated, and of work to prepare a new Scottish liturgy which the Liturgy Committee has been asked to undertake in the coming years.

The final morning of Synod saw the presence of a group of representatives of the Youth Committee who spoke of the growth in confidence they had experienced by being involved. 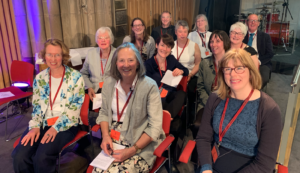 Synod closed with a Valedictory Service allowing the Synod to support those completing the first three years of initial ministerial training at the Scottish Episcopal Institute.

An offering was taken during the Synod Eucharist for Aberlour Children’s Charity. A total of £1117 was raised for the charity, which supports children throughout Scotland. Commenting on twitter during the Synod, a spokesperson for Aberlour Children’s Charity said “Thank you once again for all your support – it makes a significant difference in helping vulnerable children and young people across Scotland. Thank you!”

The provincial Standing Committee met in late June, following General Synod 2019, and took stock of various issues arising from the meeting. It will receive a report at its next meeting of the feedback forms completed by Synod members and will then give fuller consideration to the planning of future General Synods. It did however agree dates of future General Synods as 11-13 June 2020 and 10-12 June 2021.

The Committee was informed on progress in relation to the safeguarding audit, with an action group in the course of being appointed to progress the work. Standing Committee heard that representatives of the Personnel Committee had already met with the College of Bishops following General Synod, and that steps were similarly underway to identify the best ways of addressing the various issues arising from the Clergy Wellbeing Report.

Standing Committee considered at some length the debate regarding ethical investment, aware that the timing of presentation of the Rule 10 motion had rendered it difficult for an informed response to be provided on the floor of Synod. Representatives of the Standing Committee will meet with interested parties in the coming weeks with a view to scoping the role and composition of the Ethical Investment Advisory Group called for by Synod.

At its meeting in September, the Committee will continue to monitor progress in relation to the communications matters, following the dissolution by Synod of the Information and Communication Board.

The Committee also considered a lengthy report from the Mission Board on the Mission and Ministry Support Grants Scheme, now that the Scheme has been in operation for three years, and work will be undertaken in the coming months to assess the formula for allocation of funds to dioceses in the light of updated statistical information from dioceses.