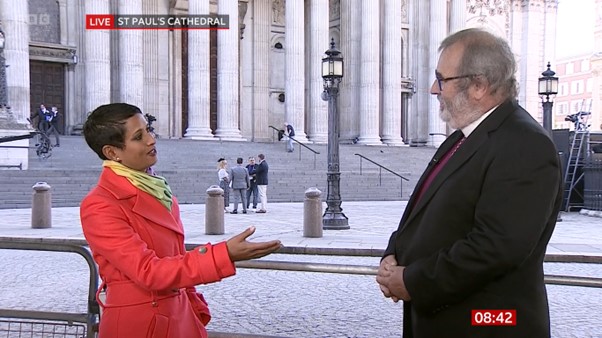 At the Service of Thanksgiving to mark Her Majesty the Queen’s Platinum Jubilee, the Scottish Episcopal Church was represented by the Most Rev Mark Strange in his role as Primus.

The service at St Paul’s Cathedral in London is one of the key events in the four days of celebrations to mark the Queen’s 70 years on the throne.

Sadly, the Queen could not be present, having experienced ‘discomfort’ during the opening day’s events on Thursday which caused her to pull out of the national service of thanksgiving.

Before going into St Paul’s, the Primus was interviewed by broadcaster Naga Munchetty on the BBC Breakfast programme.

The Bishop of Moray, Ross & Caithness told presenter Naga Munchetty of his childhood memories of how he would see the Royal Train passing by his house on the Aberdeen to Ballater line, watched the Royal Yacht Britannia come into the docks at Aberdeen, and accompanied his grandparents to Crathie to see the Queen go off to church.

He described the Queen as a person he has always recognised as a person of faith, of care, and of consideration for all.

Asked about the importance of the Service of Thanksgiving for all people, the Primus said: “We live in a country which is multi-cultural and multi-faith. The Queen is a person of faith, and we are giving the service in a cathedral today, but it is a thanksgiving service for everyone. I don’t expect everyone to believe what I believe, but that doesn’t mean they don’t have the same desire to say ‘thank you’.

The full interview can be seen here. 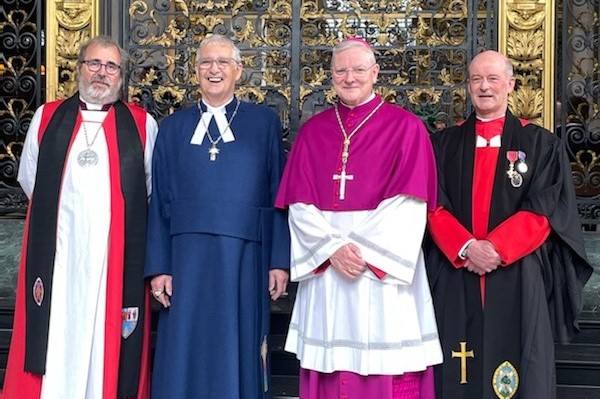 (Picture above shows the Primus, left, at St Paul’s with the Rt Rev Iain Greenshields, Moderator of the General Assembly of the Church of Scotland, the Most Rev Leo Cushley, Archbishop of St Andrews & Edinburgh, and the Rev Prof David Fergusson, Dean of the Chapel Royal in Scotland.)