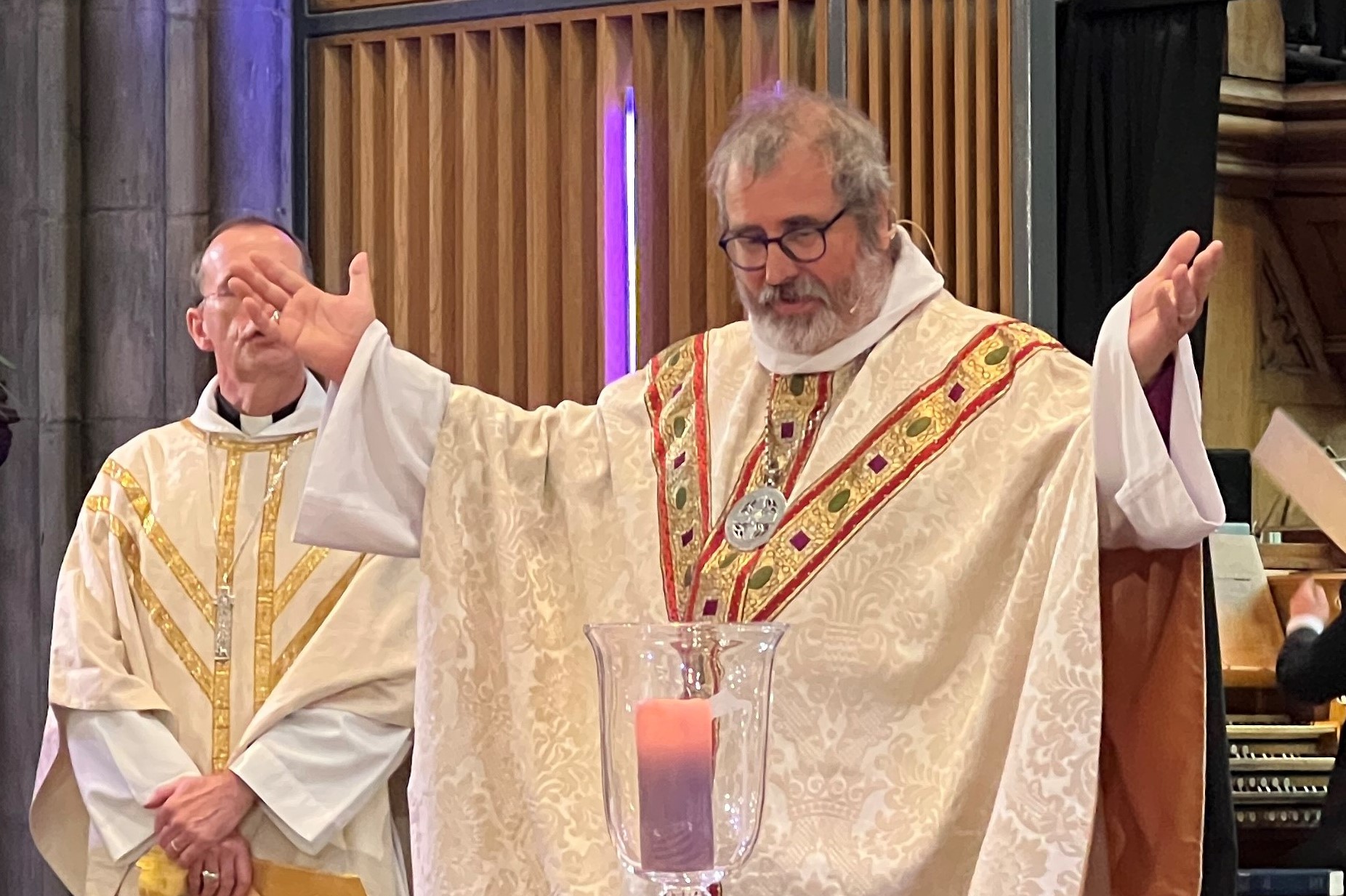 The UK Government’s decision to send asylum seekers to Rwanda was condemned by the Primus of the Scottish Episcopal Church on the opening day of General Synod 2022.

Members have gathered at St Paul’s & St George’s Episcopal Church in Edinburgh for a first hybrid version of Synod. The majority are attending in person, with a small number joining online. The meetings in 2020 and 2021 were held entirely online because of restrictions during the Covid-19 pandemic.

As part of the Opening Eucharist, the Most Rev Mark Strange, Bishop of Moray, Ross & Caithness, used the Primus’ Charge to highlight the imminent fate of migrants, with deportations expected to begin next week.

He reminded members that the opening day of Synod was also the feast day of St Columba, who when living in Ireland “found himself caught up in aggression, war and difficulties, and who got in a boat with a few friends, and sailed across eventually to Iona”.

He continued: “We are now informed that the deportation of some of those who risked their lives to reach the UK by small boats will begin on the 14th June. Those people will be sent to Rwanda under an agreement between the UK government and the government of Rwanda. There are many reasons why this is not an acceptable policy, and I will again write to the Home Secretary on this issue.

“Those being deported came to the UK not out of choice but in an act of desperation, to flee persecution at a time when their lives were in danger. Their need is obvious and their fears are real, and yet our response is not to help them but to send them away, send them far way, into further uncertainty.

“There must be another way; there has to be another way. For we are called to love one another as God loved us. To love all of us as God loves us.  Whatever else we do, we must make it known that we cannot simply pass our issues on to other places. We must be welcoming.  We must find ways of truly being community.” 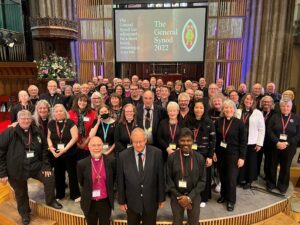 At the start of his charge, the Primus offered a very warm welcome to all members. “I can’t tell you how good it is to see you all again,” he said, “to see the Synod Hall filled with eager Episcopalians, ecumenical friends, and members of staff.

“Mind you, we gather again in a different world since the last time we gathered in this way. Much has changed, and people have experienced life and death in new and at times very distressing ways. We want to be with each other again but we are also struggling with our emotions. We need to learn again to be patient and kind to each other because I believe that people are watching the churches and hoping that people like us can continue to offer hope and a fresh way of being a Good Society.”

In the afternoon session, members considered the challenges and lessons of the two years of the pandemic. 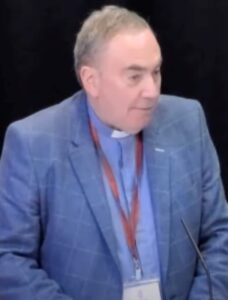 Before breaking into discussion groups, the meeting heard an honest and moving personal account of the pandemic experience from the Rev Canon Dave Richards, Rector of St Paul’s & St George’s (pictured left).

Acknowledging that the first few weeks of lockdown had been “exciting, puzzling, challenging and energising”, Canon Richards admitted that the novelty wore off and work became a grind.

“I sat on Zoom and wept with a couple as their wedding was postponed for a third time and I felt utterly powerless,” he said.

“I took a funeral for someone with only eight people permitted to be present, and the wake was individual picnic bags in the crematorium car park, socially distanced as we ate our Tunnocks tea cakes and drank our Irn Bru in tribute to the deceased.

“By mid June, I slumped on my bed weeping. I hit a wall. Physically, psychologically, emotionally and spiritually, I couldn’t lead myself, never mind lead a church.

“It was my lowest point. I struggled to pray. I was so stir crazy that I offered to drive my wife to work as she was a key worker and was allowed to escape each day to the hospital where she worked. I was Zoomed out, worn out and burned out. My rhythm of work, life, worship and prayer had been blown out of the water.

“I got better through the help of family, friends, colleagues and a Jesuit Spiritual Director, but it remained a struggle. Significant birthdays came and went on Zoom – if only I had known to call it a ‘work event’! Two years on, it seems like a dream – it’s almost hard to remember that we weren’t allowed to sing until a few weeks ago, had to wear masks for two years and were only allowed a total of 50 people in the building at any one time, which for a church of over 1,000 was particularly challenging. But now, it’s almost as if it didn’t happen.

“Your experience will have been different to mine – you may have coped better – or worse – but it is authentic to you.

“It has been said a crisis does three things: it reveals, accentuates and accelerates what is already there. So what have we learned about ourselves, about God, about the church, and what might we take forward into the future? Over to you!”

After feedback from discussion groups, and the approval of the annual report and accounts for year ended 31 December 2021, Synod carried a series of motions from the Faith and Order Board:

That the proposal that the Scottish Liturgy 1982 with Alternative Eucharistic Prayers (2021) be added to the Schedule to Canon 22 be read for the second time;

That the proposal that the Pastoral Offices for Priests be added to the Schedule to Canon 22 be read for the first time;

That the proposal that the Pastoral Offices for Deacons be added to the Schedule to Canon 22 be read for the first time;

That the proposal that the Pastoral Offices for Readers and Authorised Lay Ministers be added to the Schedule to Canon 22 be read for the first time;

That, upon the recommendation of the Faith and Order Board, the Scottish Calendar (1991) be amended to include the Commemoration of Scottish Saints and Martyrs of the Reformation Period on 19 January;

That, upon the recommendation of the Faith and Order Board, the Scottish Calendar (1991) be amended to include the Commemoration of Members of the Church who suffered under the Penal Laws on 15 June.

During the opening day, many Synod members dressed in black to show support for the Thursdays In Black campaign (as pictured above), a global movement urging an end to violence against women.