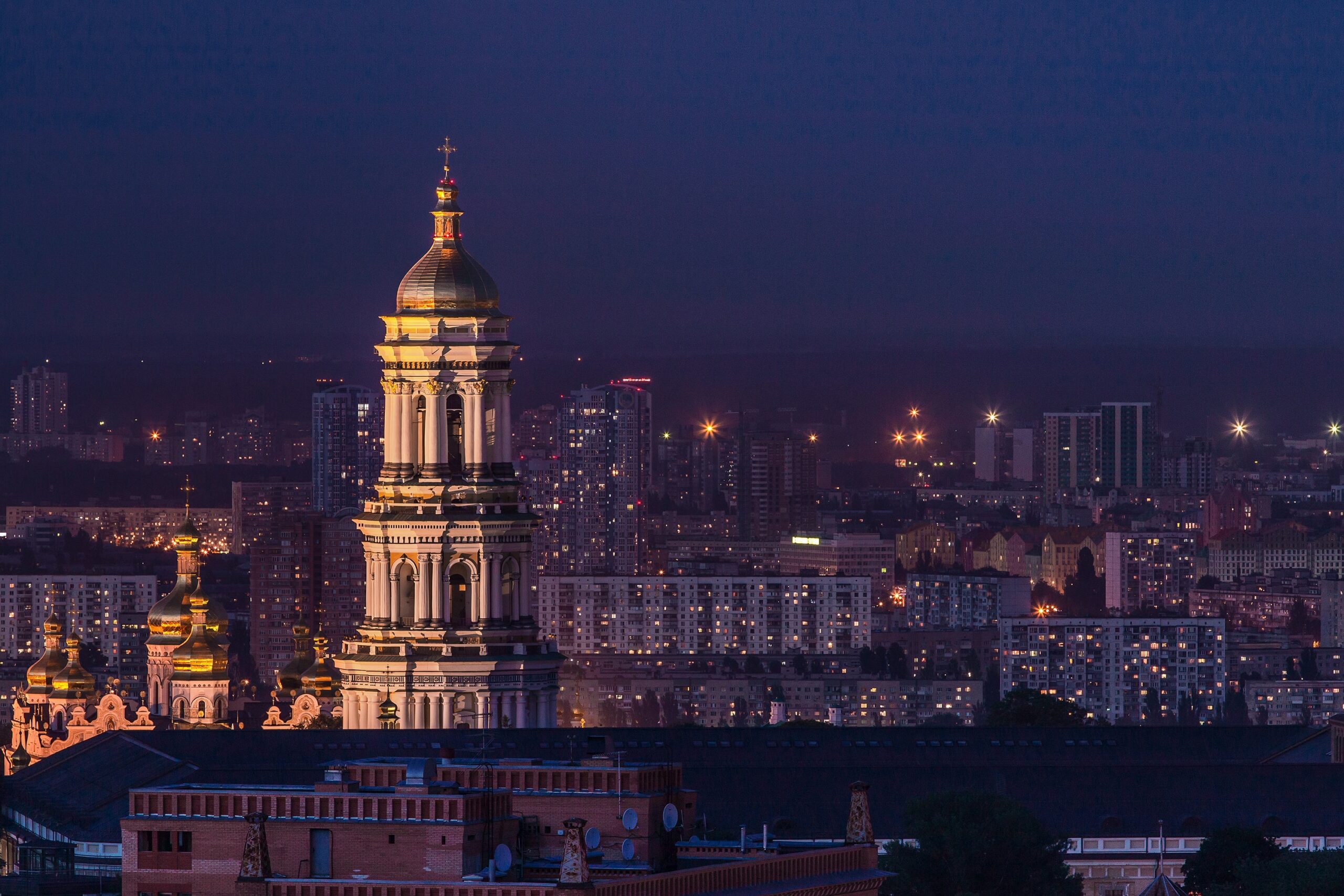 Day two of General Synod 2022 heard moving accounts of the consequences of the war in Ukraine, as members gave unanimous backing to a motion calling on the UK Government to urgently scale up the response to the crisis.

Rev Markus Dünzkofer, rector of St John’s in Edinburgh, described his mission to the Poland/Ukraine border, where he helped families leaving Ukraine. Having been encouraged by Dominic Harris, of Christ Church Morningside, to consider what more he could do to help, Markus took inspiration from a German saying about the taking of small steps to help make a big difference. 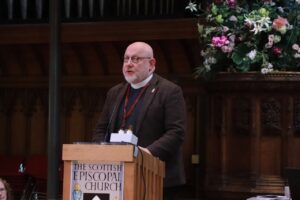 Along with Dominic, Markus (pictured above) travelled to the Ukraine border in hired vehicles which they used to transport refugees to Berlin. As Markus explained, the 25 people that they managed to transport is a tiny amount of the four million who have been displaced by the war, “but small steps really do change the face of the earth”.

Synod also heard from Sabine Chalmers (pictured below) of Scottish Faiths Action for Refugees, on the role of faith groups in the support of those arriving from Ukraine and from other parts of the world, and the issues to consider when supporting those who arrive here. 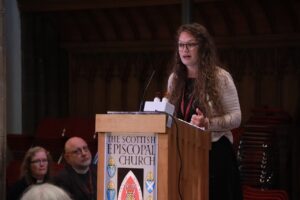 A statement from the Most Rev Mark Strange, Primus of the Scottish Episcopal Church, expressed frustration that more than three months after the war began, the UK’s response has been limited.

“The machines of war roll on, the bombs continue to fall, the misinformation and singlemindedness of President Putin continues to disrupt international peace efforts, and people continue to be killed,” said the statement. “As long as this war persists, we must be counted amongst those who oppose it.”

The statement continued: “We have not been able to do all we know we can. As the Scottish Episcopal Church, we join with voices from across the United Kingdom in calling on the Government to urgently scale up our response to the Ukraine crisis. While others around the world have opened up to welcome refugees into civic life and safety, our Government has put in place unnecessary complexities.

“We call on our governments and local authorities to make safe all routes into this country, to welcome those who flee here from danger, and to urgently increase the speed and capacity of our support for refugees.

“We must not be complacent. Let us welcome all who wish to come, let us speak out against tyranny, and let us pray for peace.”

The statement, which can be read in full here, was endorsed as part of a motion which saw Synod “deplore Russian aggression in Ukraine”. 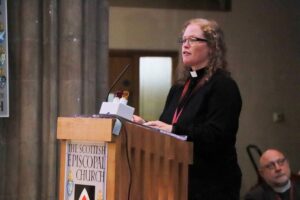 In the opening session of the day at St Paul’s & St George’s Episcopal Church in Edinburgh, Synod backed a revision of Canon 4, which relates to the calling and election of bishops to vacant sees.

The Committee on Canons presented its work on amending the existing canon, which were designed to address issues which have arisen following recent Episcopal elections.

One of the main changes proposed was the introduction of greater confidentiality. The list of candidates would no longer be made public, and all participants would be required to maintain confidentiality until the Bishop-Elect confirms acceptance.

The revised canon also seeks to minimise any delays in beginning the electoral process following the Bishop giving notice of their intention to resign, and underlines the importance of the Electoral Synod as the body which directs the process. It dispenses with the present timetable of completing the process within one year of the date of vacancy, in favour of a greater flexibility with the Electoral Synod having discretionary powers to allow an extension if required.

The revised Canon also places discernment at the heart of the electoral process.

There was considered debate from the floor, both for and against the motion, with the Very Rev Kelvin Holdsworth, Provost of St Mary’s Cathedral in Glasgow, stating that with regret he could not support the motion. As a candidate, a member of a preparatory committee, and as an elector, he said he had experienced “shambolic processes” and said that a more professional approach was needed, with the Personnel Committee in charge of the process and candidates better supported.

The Rev Diana Hall, Rector of St Anne’s in Dunbar, said that her view on the revised Canon had changed over the course of the debate. “It seems there is not a settled spirit among us,” said Ms Hall. “The time to get it right is at the first reading. If it is not quite ready, we need to knock it back until we get it right. We need to take the comments we have heard very seriously, and give it more time, thought and prayer.”

Subsequently, members voted to carry the motion, following an amendment clarifying the definition of ‘majority’, and it will now be sent to Dioceses for discussion before returning to General Synod next year. 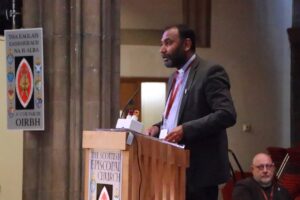 The morning session also heard how the Scottish Episcopal Institute has been supporting the discipleship of the baptised, with contributions from the Rev Dr Michael Hull, SEI Director of Studies, the Rev William Shaw, and Patsy Thomson, followed by an update on the work of the Mission Board from its Convener, the Very Rev Sarah Murray, including the impact of ‘Children’s Chapel’ online worship, and a focus on companion links from the Rev Dr Hamilton Inbadas (pictured immediately above), Convener of the Global Partnerships Committee.