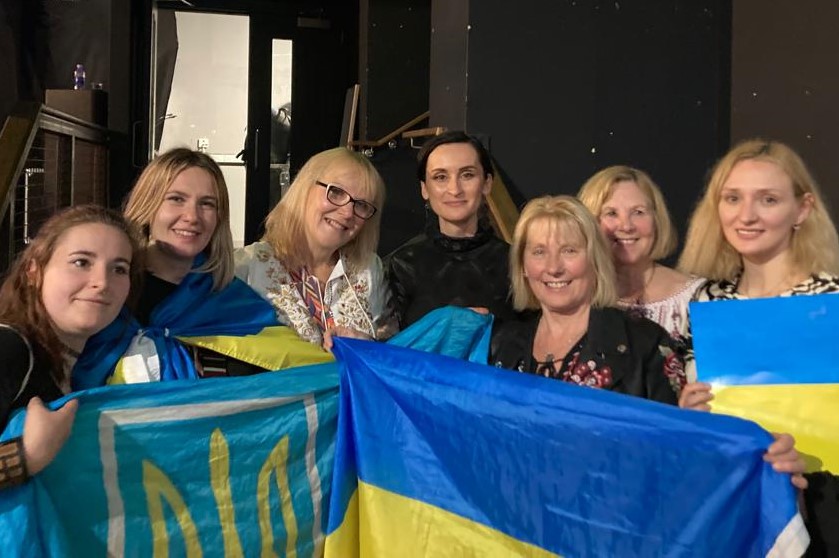 Churches across the province have offered support to the Ukrainian community since the country was invaded by Russian forces earlier this year.

In some places, congregations have been active in supporting the local Ukrainian community. The community might be comprised of long-standing residents of Scotland with Ukrainian heritage or refugee families who have left their war-torn homeland to seek safety in another country.

Donald Urquhart, the Provincial Safeguarding Officer, has been involved in the efforts to support Ukraine in Edinburgh, where he lives with his wife Senia. The Urquhart family has direct connections with Ukraine; Senia’s father came to Scotland from his native Ukraine in 1947 after fleeing from both the Soviet and German armies at the end of the Second World War, travelling to Scotland via Italy and England. Senia still has family in the Ternopil area in Western Ukraine.

“I’ve been providing some assistance to the Ukrainian Community Centre since the start of the crisis but my wife Senia, who is a member of the Committee of the Edinburgh Branch of the Association of Ukrainians in Great Britain (AUGB), has been much more heavily involved in the organising of the support here,” says Donald.

With support from the Scottish Government, the City of Edinburgh Council and EVOC (the local third sector interface), Senia has been part of a collective effort to help raise resources and funds to support the large numbers of Ukrainians who have been displaced as a direct consequence of the conflict across Ukraine. They have also been sending a large quantity of humanitarian aid to the refugees displaced within Ukraine and to the neighbouring countries who have accommodated the largest number of refugees fleeing the conflict. 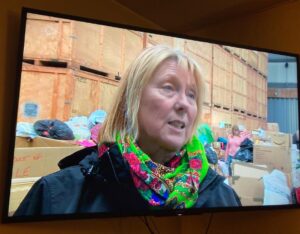 Locally, the Ukrainian Community Centre in Royal Terrace in Edinburgh, has been the focus of the efforts but Ukrainians from most areas in Scotland, including the Outer Hebrides, have been assisting in a range of efforts to support the Ukrainians who have arrived in Scotland and those who remain in Ukraine. The Centre initially received a huge amount of donations made by generous Scots and there have been regular shipments of humanitarian aid delivered to charities in Poland, Moldova and Ukraine. The NatWest Bank generously facilitated the use of a warehouse on the west side of the city to store the donations and numerous vans and trucks were loaded there for delivery to Eastern Europe by a range of volunteers. To date, over 165 tons of supplies have been sent across including medical supplies, sanitary products, toiletries, dental products, non-perishable foods, baby products, matches, candles, batteries, sleeping bags and blankets.

“You just need to think of what basics you require on a daily basis, to consider what needs to be provided to the people displaced by the hostilities that we see on the television news,” says Senia, pictured above in a television interview at the warehouse. “It’s not all military equipment and arms.”

More recently, the focus has been on fundraising because transferring funds to locally based charities in Eastern Europe and Ukraine is much easier and simpler than conveying physical goods. However, the Community Centre continues to provide a local base for the distribution of everyday necessities for those displaced Ukrainian refugees living locally as well as organising a range of events.

The Association has been organising social events for refugees to help integrate them into Scottish life so there are regular coffee mornings, language classes, art sessions, film nights and childrens’ activities. The Community Centre is also being used as a ‘hub’ for statutory agencies such as the Department of Work and Pensions, the Home Office and Social Security Scotland, to facilitate refugees accessing the services that they need. The Community Centre works closely with the local Ukrainian Catholic Church, Our Lady of Pochayiv and St Andrews in Dalmeny Street, Edinburgh, and Senia reports that the Church is much busier now with many of the refugees residing locally attending the regular services at the Church.

“It is difficult to listen to the refugees’ accounts of the situations and circumstances they left behind and which caused them to leave their homes, their husbands, fathers and brothers,” says Senia. “Watching the destruction of their homes, their towns and cities, their entire lives, without knowing if they will be able to return and, if they can, what they will find when they get there must be incredibly emotional and upsetting, to say the least. Will their loved ones be alive to welcome them back and how will they be able to rebuild their lives?”

There are undoubtedly echoes of the reasons for Senia’s father and the many other Ukrainians, and, indeed other nationalities, who were ‘displaced’ at the end of the last war. The word ‘displaced’ really doesn’t do justice to their experiences.

At the time of writing, there is no real sign of this conflict ending any time soon, indeed, there is a real possibility of hostilities escalating so the efforts of Senia and all the others who are continuing to provide support to the refugees living locally and those who are somewhere in Eastern Europe but not at home, will be required for some time yet.

“We are grateful to those who have supported this collective effort,” says Senia. “But there is more work to be done as this war goes on. Can you help?”

Supporting Ukraine, Part 2: Churches give community ‘their own space’