The General Synod of the Scottish Episcopal Church today voted in favour of altering the church’s Canon on Marriage to remove the definition that marriage is between a man and a woman and add a new section that acknowledges that there are different understandings of marriage which now allows clergy to solemnise marriage between same sex couples as well as couples of the opposite sex. The revised canon also stipulates that no member of clergy will be required to solemnise a marriage against their conscience.

The voting was in three ‘houses’ of General Synod, namely Bishops, Clergy, Laity and required a two thirds majority to pass. The voting results are as below. 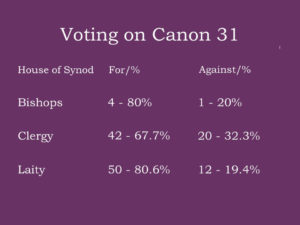 Responding to the voting outcome, the Most Rev David Chillingworth, Bishop of St Andrews, Dunkeld and Dunblane and Primus of the Scottish Episcopal Church said:

“This is the end of a long journey. There was the Cascade Process involving people across our church – the Doctrine Committee paper which explored whether a Christian understanding of marriage could extend to same sex couples. We have studied, thought and prayed.

“In the life of the church, end points are often also starting points. This is a momentous step. By removing gender from our marriage canon, our church now affirms that a same sex couple are not just married but are married in the sight of God. They can ‘leave and cleave’. They can express in marriage a commitment to lifelong faithfulness to one another and to the belief that a calling to marriage is for them too a calling to love, forgiveness, sacrifice, truth. A new chapter opens up – inclusion has taken a particular form. But this same decision is difficult and hurtful for others whose integrity in faith tells them that this decision is unscriptural and profoundly wrong. For them this new chapter will feel like an exclusion – as if their church has moved away from them.

“So the journey which we now begin must also be a journey of reconciliation.

“Every faith community must face the issues which are bound up with human sexuality – in their own way and in their own time. Others will arrive at answers different from ours. And the Anglican Communion, which is embedded in our history and to which we are passionately committed – the Anglican Communion will have to explore whether its historic commitment to unity in diversity can embrace this change.

“I have said this many times before: a vote in General Synod changes the canonical position of our church. But it cannot lay to rest the deep differences which this question exposes in this and every other faith community.

“The new Canon itself affirms that there are differing views of marriage in our church. Nobody will be compelled to do anything against their conscience. We affirm that we are a church of diversity and difference, bound together by our oneness in Christ. We shall carry forward in our life two honourable and historic understandings of marriage – one which sees the marriage of same sex couples as an expression of Christ-like acceptance and welcome – and another which says that the traditional view of marriage is God-ordained and scripturally defined.

“That is the journey. That is now the calling of this church. We must and we shall address it with truth, graciousness and acceptance of one another.”

The College of Bishops of the Scottish Episcopal Church will now adopt pastoral guidelines and principles to enable clergy who so wish to be nominated to the Registrar General for authorisation to solemnize weddings of same sex couples.