Home > Who we are > Organisation > Bishops and their Dioceses

There are seven Scottish regions – each known as a Diocese – which form the structure of the Scottish Episcopal Church.

Each Diocese is run by a Diocesan Bishop who oversees the spiritual and practical concerns of all the clergy and lay people within their own diocese.

The seven bishops together comprise The College of Bishops.  Within the College a ‘primus inter pares’ is elected to act as ‘first among equals’ in his role as Senior Bishop. The current Primus is the Most Rev Mark Strange, Bishop of Moray, Ross & Caithness.

Electing a new Bishop
When a bishop retires or resigns, the Bishopric (or See) becomes vacant. The process for finding and electing a new bishop normally takes about six months. It involves initially the preparation of a short-list of candidates and then an election by representatives of the Diocese in question.

The process begins within 21 days of the vacancy arising, by the Primus issuing a Mandate for an election.

A Preparatory Committee for the Episcopal Election is appointed. It comprises representatives of the Diocese in question but also a number of members drawn from outside the Diocese to represent the wider Scottish Episcopal Church. The Preparatory Committee publicly invites nominations for the vacancy, receives applications, conducts interviews and draws up a short-list of names of candidates for the vacant bishopric. The list must have a minimum of three names and a maximum of five names.

If for any reason the Preparatory Committee is unable to come up with a list of at least three names it must explain to the Electoral Synod (comprising both clergy and lay members of the Diocese in question) the reasons for this and it may then be given further time. If, after this additional time, the Preparatory Committee still fails to publish a short-list the election process is declared void and must be re-started with a fresh mandate.

The name of the elected candidate is announced publicly and thereafter arrangements begin for his or her consecration and installation as bishop. This normally takes around three to four months.

Appointing a Primus
The title “Primus” comes from the Latin ‘primus inter pares’ (meaning first among equals). The Primus chairs the College of Bishops and represents the College and the wider church at home and throughout the world-wide Anglican Communion. The Primus is elected by the Episcopal Synod which comprises all of the Diocesan Bishops. The bishop who is elected Primus also remains a Diocesan Bishop. 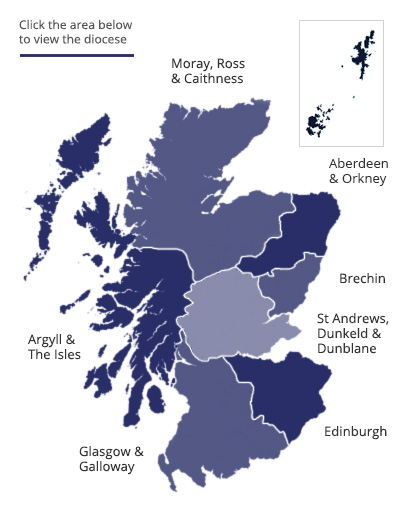