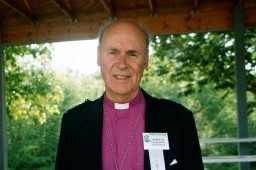 The Scottish Episcopal Church is saddened to learn of the death of the Rt Rev John Taylor, former Bishop of Glasgow & Galloway.

Bishop John was ordained to the priesthood in 1957, and served as Curate at St Margaret of Scotland, Aberdeen before becoming Curate in Charge and then Rector at Holy Cross, Glasgow. He remained in the Diocese of Glasgow & Galloway for the rest of his active ministry, including many years as Rector at St Ninian Glasgow and then at St John the Evangelist, Dumfries.

In recent years he lived in Kirriemuir, and it was there that he died on Thursday, aged 89.

May Bishop John rest in peace and rise in glory.

UPDATE: The funeral of Bishop John Taylor has been arranged for 12pm on Friday 26 November at St Mary, Kirriemuir, followed by interment at 1.45pm in Kirriemuir Cemetery.