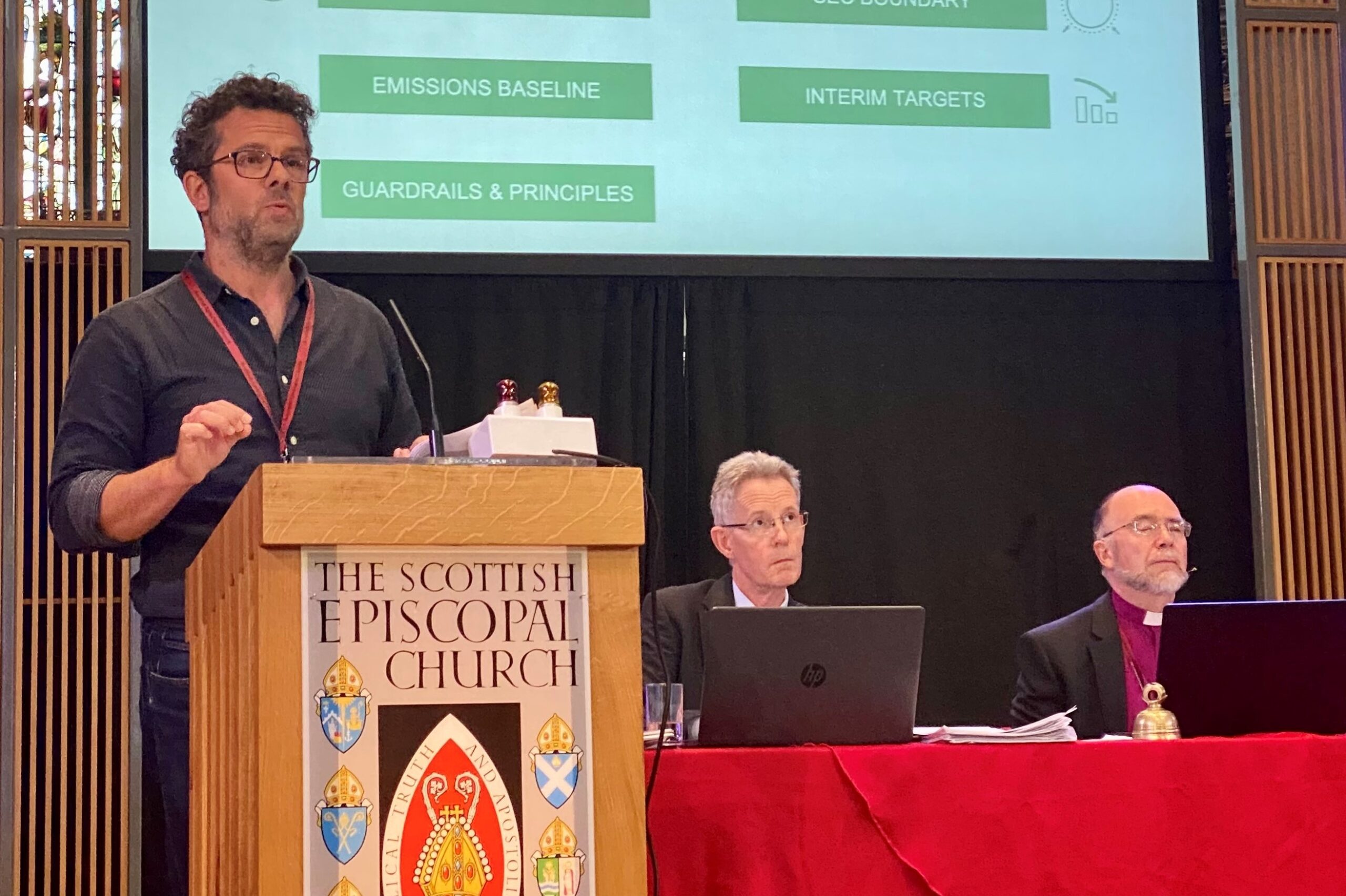 The work of the Provincial Environment Group towards achieving a 2030 ‘net zero’ target was the highlight of the afternoon session on Day 2 of General Synod in Edinburgh.

The session led by PEG member Robert Woodford was built around the question: ‘What is net zero?’ Robert told members that there is no single definition, and that the meaning of net zero is contested. However, he was able to present eight building blocks which can provide a robust, legitimate and transparent definition/pathway for net zero within the church: types of emissions, target date, scope of activities, SEC boundary, emissions baseline, interim targets, guard rails and principles, and reporting transparency.

Robert then gave members gathered at St Paul’s & St George’s Episcopal Church – and those attending online – a summary of the findings of the Energy Footprint Analyser, which was rolled out across the SEC earlier this year to encourage vestries to calculate their carbon footprint since 2018, to help provide a baseline for the journey to 2030. It emerged that eight per cent of churches which had responded were technically net zero, although the results only cover buildings at the moment, and not all emissions. For most churches, the challenge of reaching net zero is a significant one. 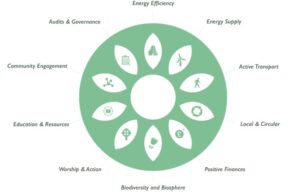 “We need a full-scale transformative of the infrastructure of the SEC from one based on fossil fuels to one powered by zero-carbon energy within seven and a half years,” said Robert. “Whilst it may appear that we are locked into an ageing infrastructure; the solutions exist and are coming down in price dramatically. Indeed, by focusing in the immediate term on increasing the energy efficiency of our buildings you will cut rocketing energy bills, end our reliance on fossil fuels and lower CO2 emissions.

“But it is important to also acknowledge that this is not about raw carbon emission numbers alone, but also about how our buildings are used. Increasing building utilisation will be paramount in order to enable our net zero strategy to support the broader mission of the church.”

A video recording of Robert’s full presentation to Synod is available here.

Synod also heard from PEG vice-convener Cathy Johnston, before Bishop Ian Paton, who had opened the session, brought the proceedings to a close with a reminder to members that climate change is not just a secular environmental challenge, “but one goes to the core of our faith and spirituality”. 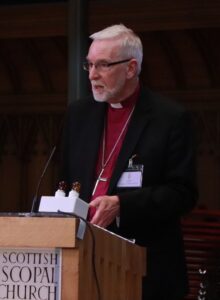 “Our faith teaches us to be tenants not owners, stewards not exploiters, creatures not users, of Creation,” said the Bishop of St Andrews, Dunkeld & Dunblane (pictured right). “We have often thought of ourselves as co-creators, the summit and centre of Creation, but now we need to think of ourselves as co-creatures instead, co-creatures with all life and with the earth itself.

“We can re-learn this from the deep resources of our Christian faith, and share them with others. We serve a God who created all that exists, who rejoices in its flourishing, calls it ‘very good,’ and is present and active in the world. Through our liturgy, our scriptures, and our partnerships with other churches and faith communities, we can find the language, strength and inspiration to change our lives and help others to change theirs.

“That is why I truly believe that, together, we can acknowledge the dire urgency of this moment and work together towards achieving ‘net zero,’ not with despair and confusion but with hope and determination.  So, as small people taking small steps in small places, keep on doing all that you are and more, and have courage because God is with us.”

The PEG presentation was followed by a report from the Ethical Investment Advisory Group, delivered by its Chair, Alan McLean QC.

“This year, the focus has turned to consideration of broader topics – firstly, how to define what ‘ethical’ and ‘unethical’ investment should mean for the UTP [Unit Trust Pool] more generally, and secondly how to put in place a procedural framework such that the Church can keep abreast of issues in the constantly-changing world of ethical investment and to analyse and respond to new challenges being presented all the time.

“So far as procedure is concerned, we have concluded that the Church has a need in the longer term for a permanent group focussed on ethical investment, reporting to Standing Committee. This group will have an ongoing role in staying alert to the ever-developing issues in ethical investment and in acting as a conduit and a clearing-station for issues raised about the way in which UTP funds are invested.”

Alan also invited Synod to adopt a new policy document, which proposed various changes: “First, formally putting in place a restricted category rule about companies that earn more than 10 per cent of their turnover from extracting fossils fuels; second, by changing the trigger point for other restricted categories from 15 per cent of turnover to 10 per cent, so the 10 per cent figure applies to all such categories; and, third, mandating Standing Committee to put in place the arrangements we are proposing to deal with these matters going forward.” 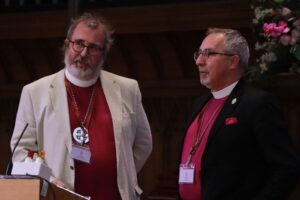 Earlier, Synod had heard updates from the Personnel, Investment and Buildings Committees, and the day’s business was concluded with an update of the work of the College of Bishops (Bishops Mark Strange and Keith Riglin pictured above) and discussion of the forthcoming Lambeth Conference.

After Evening Prayer, the Eucharist was celebrated by the Gaelic Society of the Scottish Episcopal Church.