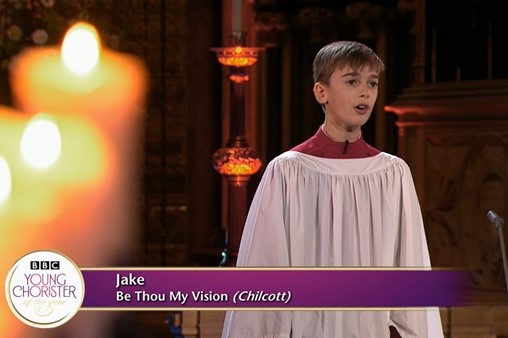 Congratulations go to Jake Thomson of St Mary’s Cathedral in Edinburgh, who has reached the final of the prestigious BBC Young Chorister of the Year 2021 competition.

BBC Songs of Praise and Radio 2 have again joined together to celebrate the contribution made by young people to choirs and music groups across the UK. 10 young singers (five boys and five girls) from across the UK were selected by a panel of esteemed music directors from the world of choral and church music and music producers from TV and radio.

In the semi-final at Salisbury Cathedral, presenter Aled Jones introduced the five boys who performed in front of judges Lesley Garrett, Howard Goodall and David Grant, with Jake singing first.

Three of the boys were to qualify for next week’s final – and Jake’s performance of Be Thou My Vision put him through. A selection of comments follow from the judges.

“Well done! This song needed the wonderful simplicity that you gave it. It’s a song where the singer is craving the need to live through God’s grace and therefore it needs a stillness to be expressed, and you more than expressed it.”

“If I had written that I would have thought this was a beautiful performance – very tender and pure. Your diction is outstanding.”

Jake, from North Berwick, said after his performance: “It was really nerve racking but it was nice to go first in that beautiful building.”

Jake’s semi-final performance can be seen here on the BBC iPlayer.

The final for boys and girls will be broadcast on BBC One on Sunday 5 December, starting at 12.30pm. Each finalist will sing a Christmas Carol.