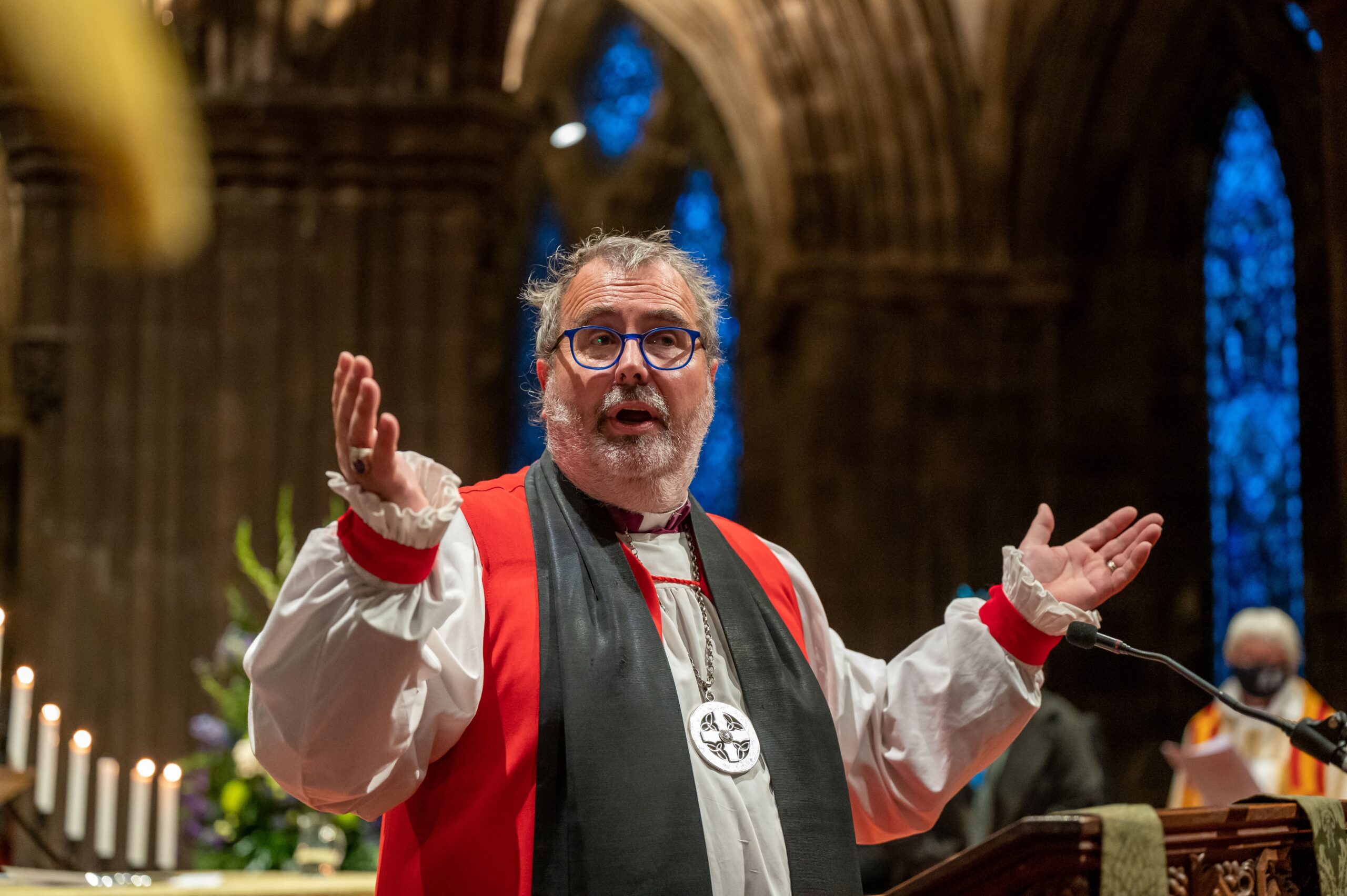 A special COP26 service involving Christian churches and organisations from around the world was held at Glasgow Cathedral (St Mungo’s).

The event, organised by Glasgow Churches Together, was attended by guests from countries including Australia, Fiji, and Zimbabwe, as a show of solidarity for global climate justice.

Many of those taking part are from nations which are already bearing the brunt of climate change.

The sermon was delivered by Rev Dr Susan Henry-Crowe, General Secretary of the General Board of Church and Society of the United Methodist Church, who used Psalm 23 as her text.

The Most Rev Mark Strange, Primus of the Scottish Episcopal Church, delivered the benediction, and he was joined at the service by the Rt Rev Kevin Pearson, Bishop of Glasgow & Galloway, and the Rt Rev Ian Paton, Bishop of St Andrews, Dunkeld & Dunblane and Convener of the Provincial Environment Group. Mia Shanks represented the Provincial Youth Committee, and the Anglican Communion delegation to COP26 was also present.

The Primus said: “This afternoon I had the privilege of attending the ecumenical service for COP26.

“I was deeply humbled to be asked to offer the blessing at the end of the service.

“Standing in that ancient Cathedral, which is also part of our Scottish Episcopal history, with a congregation full of Christians from across the globe, people I can now call friends, was incredibly powerful.

“Whatever outcomes there may be, our relationships with faith groups around the world have grown, in our shared commitment to being voices for the voiceless in the struggle for our planet’s future.” 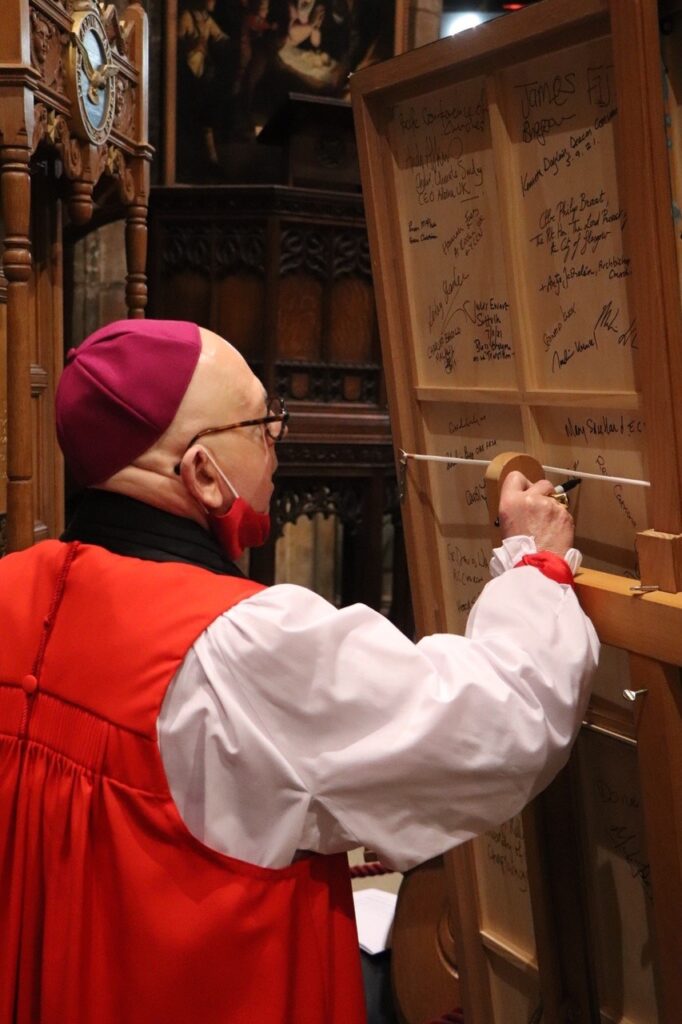 Piper Willie Park opened the service by leading a procession into the 12th century building, and later members of the clergy walked to the tomb of St Mungo, the patron Saint of Glasgow, who was buried on the site in the 7th century.

Church leaders from Scotland were each asked to invite young climate activists as guests.

Representatives from the Young Christian Climate Network (YCCN), a group who have completed a 1,200 mile relay to Glasgow were present in the congregation.

Rev Dr Martin Johnstone, who is the COP26 Ambassador for Glasgow Churches Together, said: “It has been inspiring over the last week to meet and learn from passionate young people committed to climate justice and to spend time listening to the wisdom of people from some of the nations most impacted by climate change.”

As part of her reflection Dr Henry-Crowe drew on three art installations which are in the Cathedral: ‘Returning and Into your Arms’ by James Pfaff; ‘I will sit with you and I will learn to listen’ by Gardner and Gardner; and ‘A Lament in Black Paint’ by I.D Campbell.

Dr Henry-Crowe said: “Our stories of faith acknowledge the stories of God’s goodness in creating our world.

“We know the stories of how it began and how exquisite it was.

“And we have a special responsibility to listen to those living closest to the earth and seas, indigenous communities – animals birds, fish.

“Do not pollute the waters.

“Return the habitation of your communities to clean and healthy spaces.” 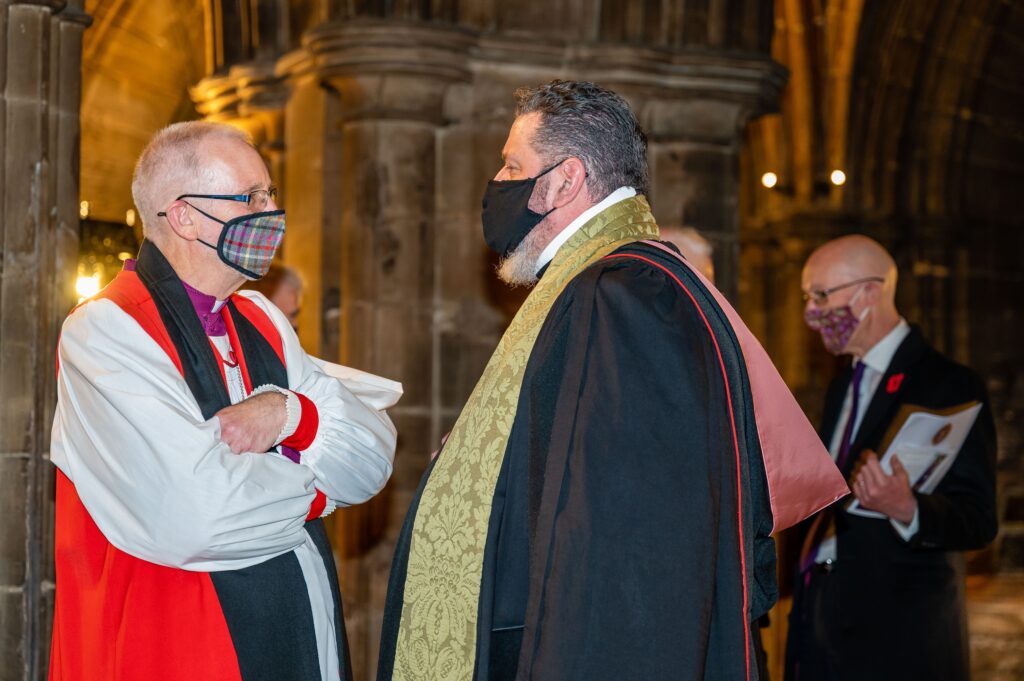 Additional contributions came from Bishop Bill Nolan, from the Catholic Church in Scotland, and Lord Wallace, the Moderator of the General Assembly of the Church of Scotland, who gave a Bible reading.

The service was broadcast live from St Mungo’s, and can be watched again here.