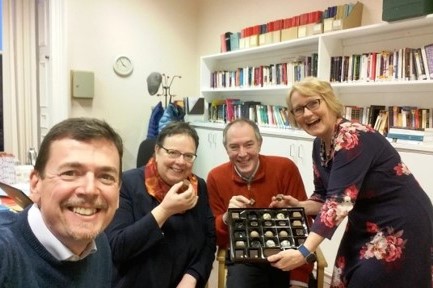 Rt Revd Anne Dyer, Convenor of the Scottish Episcopal Institute Council, reports on the outcome of a Periodic External Review (PER) undergone by the SEI in January/February last year.

“The PER described the overall outcome as one of confidence, writes Bishop Anne. “In the report there were many commendations, describing the SEI as having high standards in its operation. Many aspects of the Institute’s life show good or best practice. The review involved a wide range of stakeholders, from the core staff team and present student body, through to all involved in support and governance. It is very good that the Scottish Episcopal Church can have confidence in the ministerial training given to those in the care of the Institute.

“On behalf of the Institute Council, who was itself part of the PER, I want to commend the four members of the staff team for all of their hard work, that is Revd Canon Dr Anne Tomlinson, Revd Dr Mike Hull, Revd Dr Richard Tiplady, and Linda Harrison (all pictured above). They will rightly describe this outcome as a team effort. Nevertheless, their leadership and vision has been essential in establishing a high standard Institute in Scotland.”

How the PER was conducted

The six-yearly Review is an evaluation of those Theological Education Institutions (TEIs) which are part of the Common Awards family, conducted by the Quality Assurance (QA) division of the Church of England’s National Ministry Team in conjunction with staff from the Common Awards team, Durham University. It thus brings together under one evaluatory process both academic and formational quality assurance.

The Scottish Episcopal Institute was inspected in January-February 2020 by a team of reviewers, led by Dr Sally Buck, Warden of Lay Ministry, Diocese of Lincoln, which comprised the Rt Revd Dr Brian Smith, former Bishop of Edinburgh, the Revd Dr Kevin Francis, Rector of St Bride’s, Glasgow, and the Revd Dr Jack Dyce, Emeritus Research Professor, Scottish United Reformed and Congregational College. Team members consulted with a wide range of stakeholders in the months leading up to their three-day stay in Scotland, the latter comprising meetings with teaching staff and student supervisors, as well as attendance at a meeting of the Institute Council and a residential weekend in Perth.

Quotes from PER Report

“Our conclusion is that the Scottish Episcopal Institute continues to provide an appropriate environment for ministerial formation and is fit for purpose for preparing candidates for ordained and licensed ministry within the Scottish Episcopal Church. We say this in respect of the SEI’s teaching and learning, its worship and spirituality, its staff team and leadership, its community life and its contextual learning opportunities.”

“We commend the way in which the whole SEI body is permeated by formational and community values and, in particular, the way in which this is made possible by clear leadership and trust in others to inhabit these values in a variety of personally authentic ways.”

“Students spoke of the value of placements and context-based learning. There was a sense that all aspects of formation are approached by staff with a deeply prayerful and supportive attitude towards the planning. One person wrote of being ‘stretched, disturbed and rewarded’.”

On receipt of the Report the Principal of SEI, Anne Tomlinson, said: “The SEI staff team is delighted by the Team’s response which captures beautifully what we have tried to do in the first five years of the Institute’s life; namely place ‘formation’ at the heart of the task of shaping vibrant missional ministers for today’s world.

“We were pleased by the Team’s appreciation of the ethos of prayerful reflective practice and contextual training which underpins all we try to do, and of the high academic standards encouraged by the teaching staff and the Journal.

“The Recommendations have challenged us appropriately to create a detailed Action Plan for the next five years, spurring us on to creative conversations with the College of Bishops and others as we seek to shape the next generation of such missional leaders for our church and the URC.”

The full Periodic External Review report can be read here.