The Rev Roy Anetts was appointed as Rector of St James the Great, Cupar and St Mary, Ladybank on 24 February 2017.

The Rev Kate Gibson was licensed as Priest-in-Charge at St Andrew, Brechin on 25 February 2017.

The Rev Sister Clare Lockhart installed as Honorary Canon in St John’s Cathedral, Oban
During the Argyll & The Isles Diocesan Synod Eucharist, the Rt Rev Kevin Pearson, Bishop of Argyll & The Isles installed the Rev Sister Clare Lockhart as an Honorary Canon in St John’s Cathedral, Oban. Bishop Kevin spoke about the significant impact Sister Clare has had on the spiritual life of the Diocese and the wider Church, not just in her role of leading retreats and spiritual refreshment at the Carmel Community near Stornoway but in her involvement with congregations across the diocese and in Curacy training. 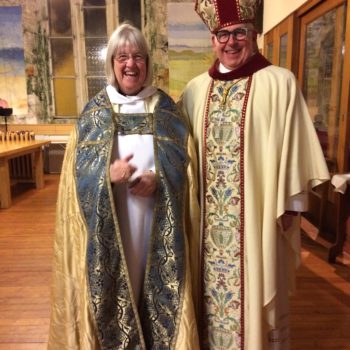